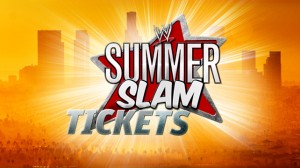 returns to Los Angeles’ STAPLES Center on Aug. 19, and tickets for WWE’s summer classic are on sale NOW. The event will mark the fourth consecutive year that the STAPLES Center hosts SummerSlam.

pay-per-view, which will be held June 17 at the Izod Center at the Meadowlands, in East Rutherford, N.J., in the shadows of MetLife Stadium – home to WrestleMania XXIX.

Tickets for both events are available for purchase at ticketmaster.com and at all Ticketmaster outlets, or charge by toll-free phone, at (800) 745-3000.

Among WWE’s original premier events, the very first SummerSlam was held in 1988, kicking off a long tradition of scorching-hot in-ring action. What can the WWE Universe expect this year, as it ushers in the 25th installment of this summertime tradition? Who will be carrying the WWE Championship and World Heavyweight Championship gold come Aug. 19? And what will the event have in store for John Cena, following his “Once in a Lifetime” match against The Rock at WrestleMania XXVIII?

Related Items
← Previous Story OWW’s This Week in Wrestling
Next Story → SummerSlam: A Look Back at Summer’s Biggest Show