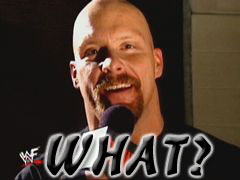 When WWE is spoken among wrestling fans, you’ll get two responses. You’ll get that wrestling fan who has been with the company through the good, bad, and the unrecognizable ugly, but still fans of the company.  Then, you have those fans who gave up on WWE and wrestling in general. I’m really on the fence when it comes to my loyalty of your company. In the past, I’ve spoken about equality among the minorities in the company and wanting a fair opportunity for all talents. Thankfully, I must say with that issue, I’ve seen an impressive improvement. However, I have another issue with your company. I assure you, that my issue is reasonable and will not cross any boundaries.

Please, get rid of your anti-bully campaign because it’s contradicting to your product and makes you foolish. I completely understand the reason behind the campaign, but the idea as a whole is counterproductive. Why is it counterproductive? Your reason behind starting STAR is one of the reasons. You started the anti bullying campaign on April 29, 2011 and since have been fighting against the issue of bullying in the world. However, your reason behind starting the campaign was to get exposure and receive some positive P.R. Along with your company and a line of celebrities, you all threw your names in the ring and allowed the world to applaud for your efforts. You may question, why not challenge other celebrities and their actions with this issue. I don’t watch their product and have been a dedicated wrestling fan since a child. If you truly wanted to fight against bullying, you would have started something similar years ago, but you didn’t. Your company and some of your wrestlers were the bullies and in some right you were proud of that.

Your reason behind starting the campaign was comical, but your intention may have been sincere. However, everything your company has demonstrated on your television has shown bullying to the fullest degree.  The definition of a bully is a blustering, quarrelsome, overbearing person who habitually badgers and intimidates smaller or weaker people. One example of this issue is when Vickie Guerrero comes to the ring and your commentary team begins insulting her about her weight. What does that say to all the young women who have some weight? If I get into wrestling, they’ll make fun of my weight. After they insulted Vickie Guerrero about her weight, your company has the nerve to show an anti bullying commercial. Other examples are your wrestlers insulting each other about how they look, dress, or act towards situations. Again, read the definition of bullying.

All I’m saying is that wrestling is bullying, most your heels are bullies in some form or fashion. An anti bullying campaign shouldn’t be associated with WWE because your company embraces bullies if they give ratings and brings merchandise revenue. All I ask is that you be honest with yourself and fans.

If you appreciate exceptional wrestling discussion, check out the alternative to traditional pro wrestling radio at: sunsetflipwrestling.podomatic.com Check out this week where you’ll have 4 minutes with Mr. Anonymous and Bills classic of the week, hostile homecomings.  In addition, the show a special guest and it’s Mr. Anonymous.

Related Items
← Previous Story AS I SEE IT: Matt Hardy fired from TNA
Next Story → OWW Radio’s Michael Tarver in the house recap