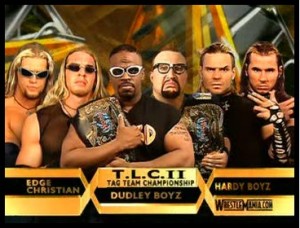 It is 2013 right? Well yes it is if you’re an old school fan who grew up on tag team wrestling than you love what WWE is doing right now. Triple H AKA Paul Levesque is starting to get that trend back in the eyes of the WWE universe. He has taking a more of a backstage role if you didn’t know and was living under a rock for the past two years.

Tag team wrestling is what guys are here to own their craft to make it where they can have a good productive singles match. Don’t you remember the hard hitting style of the Road Warriors or the flashy in your face style of the four horsemen. The Anderson brothers are the enforcers who brought it to anyone who stepped in the face of the “Nature Boy” Ric Flair. If you are not that old like me lets go back to the attitude era where there was three top tag teams in WWF or WWE at the time.

Let’s start with the Hardy Boys, Oh yeah those stunt devils who would do anything and everything to get noticed. Jeff was the guy who wanted a bigger ladder every time to jump off. He had no fear in the world, as for Matt the more basic wrestler who had the wrestling knowledge of the two. How do you get noticed in the WWE you ask? It’s simple get noticed and taking crazy spots is a good way of getting that done.
The next group is the Dudley boys who brought the E to WWE. “Get the Tables Devon” is a legendary line that will live in the hearts of the fans for a long time. They are a hard hitting yet cutting edge tag team that could have a match with anyone in any style brought to them. The guys who wanted to take the bumps to make the fans cringe and react with the thought of was that supposed to happen?

The third and final team that made these guys flow / made each other was the team of Edge and Christian. Both are world champions and arguable the greatest tag team of all time. Both men can wrestle with the best and cut promos with them as well. Edge was of course the stand out guy In the group no doubt. You could see that he was going to be a star one day. They had the smarts to go toe to toe or out smart you with their college humor. They made you hate them but also make you laugh at them.

The point of talking about these three attitude era top tag teams are simple. Tag team wrestling, like anything else needs a rival or someone they can compete with. For years after these teams was broken up, release by the company or put in the mid card status the WWE had thrown together tag teams that only had one significant other team to challenge.

Today’s WWE Tag teams have superstars like the Shield, Uso’s, Rhode Brothers, Prime Time Players and several others. If you watch the WWE product then you will see them having several tag team matches on the shows. It’s a fun time to be a wrestling fan of tag team wrestling for sure.