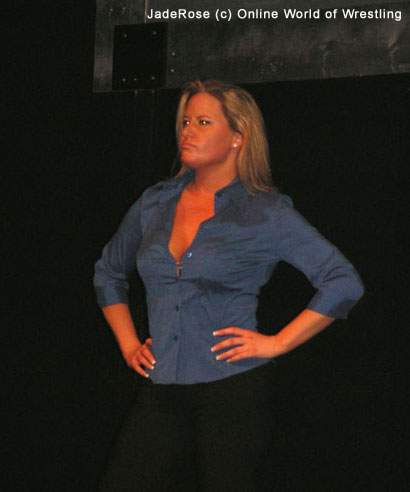 Bringing some T&A..Tradition and Attitude”

The original diva of the WWE, or WWF as we knew it then will make her NWA Oklahoma debut at “STARS UNDER THE STARS 08”. Tammy Lynn Sytch, also known to the world of sports entertainment’s “SUNNY” has signed to appear at NWA Oklahoma’s return show “STARS UNDER THE STARS 08” in Tahlequah, OK at the Tahlequah Rodeo Arena located on HWY 62 across from the Cherokee Casino. Tammy who took some time away from the ring is ready to show Oklahoma what has made her the manager of championship teams The Body Donnas, The Smokin’ Gunns, and the 1996 manager of the year as voted by Pro Wrestling Illustrated.

Also signed for the big night of pro wrestling, the NWA North American Champion Mike Dibiase, son of the legendary Ted Dibiase will defend his title against the NWA Oklahoma Champion Slam Shady. Charming Charles will announce a new HATE LLC, the NWA Oklahoma X Champion Justin Lee will defend the title, and see the Original MASS DESTRUCTION, Spoiler 2000 and Bash reunite. Others appearing include the Leaders of a New Revolution Mark Sterling and Darrien Sanders, The Mayne Event Les Mayne, Mark Anthony, The Space Cowboy Jason Jones, the NWA Central States Champion Michael Strider, and the original voice of NWA
Oklahoma Rick Vyper.
Tickets go on-sale Monday, March 10th at RPM Paintball in Tahlequah and online via WWW.NWAOK.COM, ticket prices are $10 ringside, $6.00 general admission, Bleachers, $4.00 students/seniors general admission bleachers, and kids 8 and under free general admission bleachers. Doors will be at 5:00 pm, a big autograph party is set from 5:30-7:00 pm with all of the stars appearing as well as major door prizes including a kids NWA Oklahoma Championship belt, and bell time is 7:30pm. In the event of rain the show will be mover to the new AG building located next to the rodeo arena. Tahlequah’s Lake Country KEOK will be broadcasting live from “STARS UNDER THE STARS 08”, Saturday, April 12th, Tahlequah, OK, Tahlequah Rodeo Arena.
NWA Oklahoma bring T&A “Tradition and Attitude” to the sooner
state.
Show produced by NWA Oklahoma/SlyFox Entertainment, LLC
Card Subject to Change Without Notice.
NWA Oklahoma
T&A…..Wrestling with TRADITION & ATTITUDE
www.nwaok.com
www.myspace.com/nwaoklahoma
www.nwawrestling.com