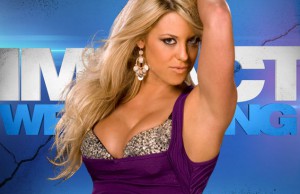 TNA Wrestling star Taryn Terrell insists she won’t stop doing “crazy” moves in the ring – despite being a new mum.

The 28-year-old babe took almost a year off from the business to welcome her first child Emerson in March, but she has no plans to tone down the risky wrestling style which helped her win over her critics prior to her break.

Terrell’s series of matches with veteran Gail Kim, including a daring Ladder Match, made fans take her more seriously after entering the industry as a model and actress with no knowledge in the ring.

She told the Mirror: “I wish I could say yes, I’m going to tone it down, but I can’t.

“I’ve got my baby in the back of my mind, I know have to go home and take care of her, but at the same time, what I do in the ring is special and the matches that I’ve had with Gail are magic.

“I’m not going to take that away from the fans, or my passion – so I do have my baby at the back of my mind, I do everything I can to be safe out there, but what I love is doing the crazy stuff.