After making several appearances for the company over the past few months, the ECW Original returned to the announce table for last night’s AEW Dark tapings in Miami at the Watsco Center. Taz then inked his contract after the show ended.

“We’re backstage, Miami, Florida. We just had ‘Bash at the Beach’ and we get to have a very authentic All Elite Wrestling moment with you,” Cody said. “W’re here with AEW Vice President Chris Harrington, festively dressed for the event, and we’re here to officially sign the contract for Taz.”

Taz then said his people have looked over the deal and “the coin looks right.”

They signed the deal, shook hands and Taz added, “Well, it looks like I’ve joined a revolution… again.”

Taz spoke to Wrestling Inc. last September on our WINCLY podcast and discussed the possibility of working for a major promotion again.

“I feel if I got back into the game now as a color analyst, it’s gotta be a place that’s willing to let me apply my trade as I like in terms of breaking down the physicality,” Taz said. “I’m a guy who drew money, won a lot of matches, lost a lot of matches. I’ve done everything in the business and I have three decades in the industry. To me, I’ve done it all and I bring that to the table. It’s not just a guy who was pretty cool on commentary on SmackDown.”

Stay tuned for updates on Taz’s AEW status. You can hear him make his AEW commentary debut in the video above, which is the recent AEW Dark episode from Philadelphia, PA. 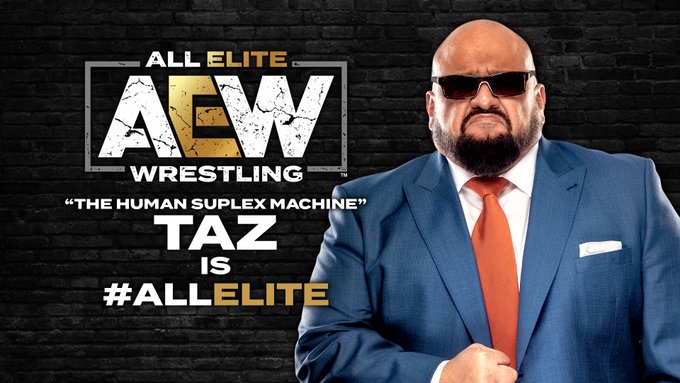