Home / Columns / Television is the Life Blood of Pro-Wrestling

Television is the Life Blood of Pro-Wrestling 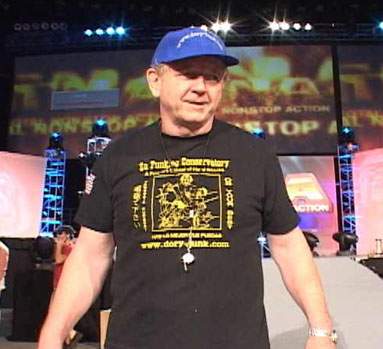 In those days the only way to preserve live video was a method called Kinescope whereby live video images were transferred to 16 or 35 millimeter film. Kinescope could be reproduced and bicycled to major cities for television programming, professional wrestling being hugely popular.

Wrestlers who were featured on Wrestling from the Marigold were perceived as stars and were in demand throughout the country.

With the invention of video tape for network television, Jules Strongbow in Los Angles produced a quality national television show out of Los Angles featuring Lou Thesz, Wilbur Snyder and a father and son tag team, Gino and Leo Garibaldi. I remember the winner of the main event received a wrist watch presented by Jules at the end of the show.

In the “Glory Days” of the National Wrestling Alliance 33 territories produced their own Television Shows featuring their own Wrestling Superstars.

At the Funking Conservatory our training priorities are SAFETY, IN RING PERFORMANCE and TELEVISION.

!BANG! TV and Premium !BANG! TV are  Produced weekly and seen in 120 countries and are the showcase for our wrestling stars of the future.

Television will always be the life blood of Professional Wrestling.

If you would like to become a professional wrestler and appear world wide on !BANG! TV visit our website at http://www.dory-funk.com or call now 352-895-4658.

Dory Funk Jr. is the coach of the Funking Conservatory Wrestling School and Trainer of WWE, TNA, NXT and Japanese Wrestling Talent.