The 50 greatest WWE entrance themes ever! 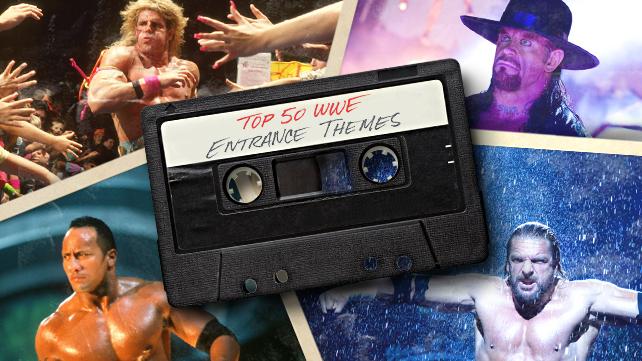 No feature about entrance music can begin without a tip of the bright, red cowboy hat to Michael “P.S.” Hayes. Back before the leader of The Fabulous Freebirds convinced promoters to pop a tape of Lynyrd Skynyrd’s “Freebird” into the P.A. system to accompany Hayes and his flock of rebels to the ring, most pro wrestlers didn’t have themes.

Hayes’ coolest contemporaries followed suit — The Junkyard Dog with Queen’s “Another One Bites the Dust,” Kerry Von Erich with Rush’s “Tom Sawyer” — and a new level of theatrics was introduced to sports-entertainment. In the early ’80s, when Mr. McMahon tightened the bond between adults who wore spandex with the “Rock ‘n’ Wrestling Connection,” the entrance theme became an integral part of the presentation as WWE’s Chairman began to produce original songs for the Superstars on his roster.

WWE fans have rocked out to hundreds of awesome entrance themes since then, but which 50 were the very best? WWEClassics.com has created the ultimate WWE mixtape, so sit back, put on your headphones and play this feature loud.

Tazz’s 2000 entry into WWE as a surprise opponent for Kurt Angle was meant to be a shock to the members of the WWE  Universe crammed into Madison Square Garden. But the moment his yet-unheard entrance theme hit — with its pulses of synthetic bass, deliberate snare drum and the ominous electronica of a flatlining heart monitor — the always-in-the-know New York City faithful immediately recognized it as the arrival of the most rotten man in all five boroughs.

Some WWE followers may have been unfamiliar with the particular brand of mayhem The Human Suplex Machine wreaked in ECW, but his hard-charging theme instantly identified him as a Superstar that you sat up and watched. — RYAN MURPHY