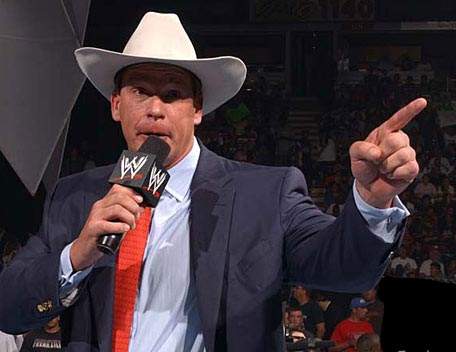 While the in-ring talk this week will be the “superstar shakeup,” there’s a lot of out-of-the-ring discussion of late about JBL and his longtime reputation in pro wrestling as a bully.  Those stories are old hat, but they received new life following the disappearance of Mauro Ranallo, and also an incident in Justin Roberts’ book about how JBL would harass him.

None of this is new, and we’ve maintained for years that both JBL and fellow bully Bob Holly should’ve been fired many years ago for their behavior.  We’re glad these stories are coming to light again, and we hope it leads to some changes in WWE that are long overdue.

On that note, the theme of this week’s quiz is “JBL’s Bullying.”

1) Mean Mark Callous and Danny Spivey were called the Skyscrapers.

2) Brother Love managed the Undertaker before Paul Bearer did.

3) Hulk Hogan retained the WWF Title from the Undertaker at This Tuesday in Texas in 1991.

4) Of the men we listed, Shawn Michaels did NOT wrestle the Undertaker at WrestleMania in the 90s.

5) The “Underfaker,” aka the imposter Undertaker, was played by former SMW champion Brian Lee.  Lee wrestled years later for the WWF as Chainz.

6) The Kane-Undertaker storyline was told by Paul Bearer in a long in-ring promo on Raw.  Good thing the “What” chants didn’t exist in those days.

7) To build heat for his feud with Ric Flair, the Undertaker went to OVW and beat up his son, David Flair.

8) In the second Shawn Michaels vs Undertaker WrestleMania match, Shawn would have to retire if he lost.

9) When Brock Lesnar pinned the Undertaker at WrestleMania 30, the referee did not know that would be the finish.

10) At WrestleMania 32, Shane McMahon would’ve gained control of Raw if he beat the Undertaker.

1) The most famous incident with JBL is, of course, his shoot with the Blue Meanie on a live PPV.  Meanie had gone on the internet and said how JBL was a bully.  And then, to prove Meanie correct, JBL shot on him, opening up some fresh staples Meanie already had in his head from a match with Sandman two days prior.  This all took place at ECW One Night Stand in 2005, in what kind of match?

2) Did WWE fire JBL?  Of course not.  To avoid a lawsuit that Meanie by all rights should have won, WWE appeased Meanie in what way?

a) They paid him off in exchange for not suing.
b) They booked a worked match between JBL and Meanie on SmackDown, which Meanie won.
c) They allowed Meanie to punch JBL full on in the face backstage, as a free shot to even things up.
d) They allowed John Cena to work a date for Meanie’s indie promotion, 3PW.

3) The hilarious irony is that the one guy who did knock JBL down in a bar fight was hardly someone who was physically imposing.  Who was this brave, heroic person?

4) Former WWE wrestler Rene Dupree, who was barely 21 years old at the time, is on record saying JBL would call him a “French f*ggot” all the time backstage.  Unreal.  Dupree had a lot of heat with the boys, but that’s still no excuse for harassment.  What oWWE bully (not JBL) famously beat up Dupree for real during a house show match?

5) The word JBL has used to define what he did is “hazing.”  It’s a fancy word for bullying, and one notable current WWE star suffered through it big-time, with JBL specifically named as one of the culprits.  This star said that he wasn’t allowed in the locker room for months, and had to dress in the hallway.  Perhaps his non-wrestling background rubbed people the wrong way.  Who was the recipient of this hazing?

6) The most recent victim of JBL’s bullying (non-physical this time) is Mauro Ranallo.  It’s something a lot of people sadly predicted long before it happened.  Why should JBL have been extra careful to not mess with Mauro?

a) Mauro is friends with Bas Rutten and Josh Barnett, who could easily kick JBL’s ass if they wanted to.
b) Mauro suffers from bipolar disorder, so he’s at a higher risk of depression.
c) Mauro is actually trained in both boxing and MMA, and could’ve really hurt JBL.
d) Mauro’s father is a world renowned lawyer who would gladly sue and defeat JBL in court if needed.

7) Another guy who stood up to JBL was Steve Blackman, a notorious tough guy who could’ve knocked JBL’s head off his body if he wanted to.  And he almost did.  Why didn’t he?

a) He was talked out of it by Ron Simmons.
b) JBL’s kids were there, and Blackman didn’t want to kill their dad in front of them.
c) There was a ton of security around, and Blackman would’ve gotten arrested.
d) When Blackman went for the head kick, his leg got caught in a piece of luggage, since the fight happened near the luggage carousel at an airport.

8) Fresh in the news, former WWE ring announcer Justin Roberts has been in the news for the stories in his book of JBL’s bullying. What did JBL want to have stolen from Roberts that was really important to him?

a) A necklace he wore that was a family heirloom.
b) His passport.
c) His wallet.
d) His lucky scarf.