Home / Columns / The Beast, Fighting Biggest Battle Of His Life

The Beast, Fighting Biggest Battle Of His Life 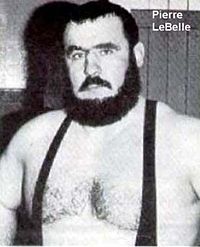 The Beast, Fighting The Biggest Battle Of His Life, Outside Of The Ring

Yvon Cormier, it may not be a household name in most parts of Canada, but in The Maritimes he is the most beloved folk hero of our time. Cormier, better known as The Beast first appeared on the wrestling scene in 1963 and captured the hearts of young and old with his shear brute strength and raw power. As a child I fondly remember my grand-father’s stories of his feats of strength, and things he used to do to amaze on-lookers. We lived some 3 hours from Memramcook NB, where Yvon Cormier lived, but he talked about him like he lived down the road, as do most Maritimers when they tell you their favourite stories about him.

He was not a giant of a man, at 5 ft 10, 255lbs during his career, he was one of the legitimate strongest men in Canada at one time, and lived up to that reputation with ease. He was more than a strong-man, he was one of the first wrestlers to be a weight and health fanatic, as many wrestlers later recall, “he would be lying there bench-pressing 450 pounds like it was a 50 pound bag of potatoes, totally amazing”. His knowledge of how to use his brute like strength no doubt came to him at a young age from shoeing and working with horses in the fields and dead-lifting boulders into the back of the wagons to working in the woods. The legend of his strength had begun, way before his wrestling career ever did. When Yvon started out in wrestling he went by the names Pierre Lebelle and Ivan The Lumberjack, but it was during a trip to the Southern States that he was given the name “The Beast”, by promoter Jim Crocket Sr. and kept until the day he hung up his boots for good. The Beast travelled all over the world during his career and once wrestled Giant Baba in Japan, in front of 46 000 people. The Beast wrestled seven different world champions, including six, 90-minute draws with world champions. He also toured Australia periodically with his brother Rudy, who passed away last May.

You hear stories in every corner of The Maritimes about Yvon, like how as a teen he would lift huge boulders onto the back of the horse drawn wagons, how he once bench-pressed a phenomenal 527 lbs officially back in 1979, and I think one of the most famous stories I’ve heard was he was out in the field, his horse was being very un-cooperative and Yvon had punched it behind the ear and knocked it completely out, dropped it like a ton of bricks!! As I recall this, I can still see the gleam of pride in my grand-fathers eyes as he raised his fist, which was the size of a small ham(for he was a big man), and POWW!! he said, just like that, the horse was out cold. I remember thinking (keep in mind I was a small boy) WOW, that is something, this man must be a giant!

My first meeting with The Beast went very well, I was nervous as one can be, and my grand-father said, come on lets go, he is really a nice guy get his autograph. He was standing there outside the locker-room watching his brother Bobby in the ring, arms crossed with the “Beastly” stare in his eyes, I was scarred shitless, even though he was a good guy, he looked like a bad guy, was I ever wrong. My grand-father was first to approach him as I hid behind him, they shook hands and talked for a moment, then he said with a grumble “come here young fella, I don’t bite”. I got to meet him and get my picture autographed, I had done it, I had met The Beast, he wasn’t so scary after-all.

I have been doing alot of research for a little project I am trying to put together in The Maritimes this summer and needed to find out some info about the Cormiers, I was contacted with an email that I thought contained information that I had needed, instead I was caught totally off guard with its contents, it reads as follows,

Dear Joe,
“My dad is in the Hospital fighting cancer so I don’t know what is going to happen. I am in Alberta and the rest of my family is all in NB. Being the only girl with 4 boys I didn’t follow the Wrestling like my brothers did. I was daddy’s girl and never wanted to see him get hurt. I probably wouldn’t be the best one to interview, my brothers would be better. I can ask one of my brothers to contact you if you would like? Just maybe once things settle down with my dad. He found out last May around the time my uncle Rudy passed away that he had Lymphoma and after his first treatment he had a heart attack so once he got over that we were thinking all was good but when he went for his last treatment in December they found a few more lumps so they were not able to do his last treatment after more tests they found out a few weeks ago that it moved to his bone marrow we were told that they are going to give him a few treatments and if they don’t work there is nothing else they can do. My dad has been in some big fights in his life but this is the biggest fight of his life. For this one I am ring side and wanting him to win..…”
Thank you for your prayers,
Anita

As I read this email, my eyes watered up. I could not believe what I was reading. I immediately dropped everything and went into deep thought, how could this be? A man who had sacrificed so much in his personal life, to give us, the fans, memories that will last a lifetime, that will carry on to the next generation as it has to ours, in our folk stories, laughter and recollections, he was involved in the biggest fight of his life, yet there wasn’t even a ripple of information in the media about our beloved Beast.

Our thoughts and prayers are with you and your family in your time of need Yvon, you mean more to all of us than what you will ever know…Anita, I think I speak for everyone when I say, we are all at ringside with you now, waiting for our Mighty Beast, our Hero, to kick out once again…..GET WELL SOON…..