The City of Brotherly Love (Philadelphia) 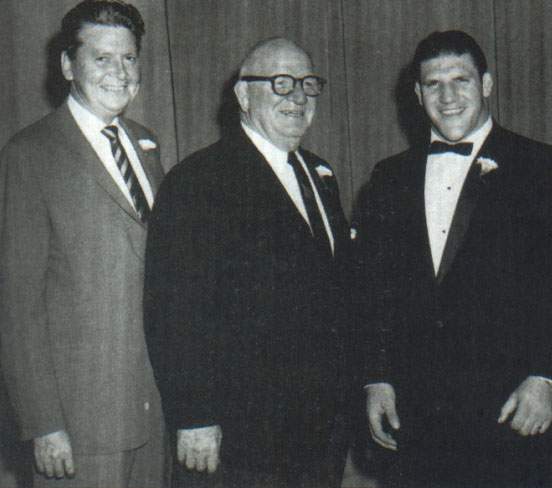 A name that has not really had meaning in just over 300 years when William Penn chartered the city in 1701. Philadelphia, being the former capitol of the United States during the colony years and site of the creation/signing of the Declaration of Independence, also has tons of historical sites. There is just too much to talk about Philadelphia as a part of American history. Philadelphia has also been among the most historical places in professional wrestling history.

What I meant by “City of Brotherly Love” not having meaning is its definition, though there is a lot of love, obsession, respect and history as a pro wrestling city You do however constantly hear from politicians, reporters, sportscasters, the term City of Brotherly Love. The first NWA World Wide Wrestling TV taping back in February 1988, Bob Caudle opened the show “Welcome everyone from the City of Brotherly Love”. The city is best known by the term. But Philadelphia is known for having one of the most historical backgrounds in wrestling history probably only second to New York’s Madison Square Gardens. The Garden wrestling dates back to the last 19th century, Philadelphia goes way back to the 1920’s.

The old Philadelphia Arena, originally known as Philadelphia Auditorium and Ice Palace opened Valentine’s day 1920. In historical World Championship records many of title changes possibly took place at the arena (most are listed as Philadelphia only, the arena during dates listed was the major sports facility of the city). Though the WWWF began in 1963, it’s possible with vague arena results that, Vince McMahon Sr’s Capitol Sports (cooperating with the NWA) were running shows in the arena before the name change and McMahon Jr’s involvement. When McMahon Sr and Toots Mundt started their own company leaving the NWA (due to the Buddy Rogers-Lou Thesz match), the WWWF named Buddy Rogers the first world champion.

The reign of McMahon’s territory outside New York traveled down to Philadelphia following Bruno Sammartino dethroning Buddy Rogers for the title (although records state Rogers defended at the arena). But it was not until December 1, 1973 that a WWWF title changed hands when Stan Stasiak became a transitional champion removing Pedro Morales as champion. McMahon talked Bruno into becoming world champion once more but did/could not have two baby faces trade the belt. The days of the old arena had it’s golden age well before Sammartino. It did prosper with him as champion and a few others. Philadelphia became hot spot for wrestling under the McMahon’s thru the 1970’s with several tv tapings and tag team title changes.

But with all buildings, age takes it’s toll and just like ballparks they either need renovation, expansion or a just a new state of the art building. The Spectrum in South Philadelphia on Broad Street opened back in 1969 but did not host a WWWF show till August 3, 1974. For some reason the WWWF continued to use both the Arena and new Spectrum from 1974 thru 1977. The Spectrum became the main arena in Phila by 1978. And just like the constantly overstated name City of Brotherly Love, “The Spectrum” was to Philadelphia as Madison Square Gardens was to New York.

The Spectrum became one of the hottest wrestling arenas around the world thru the 1980’s and mid 1990’s. When pay per view brought wrestling superstars into the living rooms Philadelphia was no exception except it was slow. First, when Jim Crockett Promotions expanded from the Mid Atlantic area into Philadelphia, using the Civic Center from 1985-1996 gave Phila’s it’s first wrestling pay per view Halloween Havoc in October 1989. And like the Spectrum years, JCP ran shows in Philadelphia that would be far exceed some WWF pay per views. A competition began, that was a predecessor to the RAW-Nitro wars, when JCP and WWF ran shows the same day in the Spectrum and Civic Center respectively.

Upon the opening of the new Corestates Center (later First Union and now Wachovia) next to the Spectrum, both WWF and WCW (formerly JCP) ran shows in the new state of the art arena. Yes even the Spectrum finally ages as the old Arena did.

But unlike the old Arena (which deteriorated by the late 1970’s and destroyed by a 1983 fire), the Spectrum still exists but only for some sports. In 1993, a new age of pro wrestling arrived in the United States known as hardcore or extreme. Starting in early 1992, ECW a small independent group, which followed after a failed promotion TWA, (which hosted shows in the Civic Center) expanded to a banner of violent wrestling with a mixture of weapons, tables, chairs, and anything they picked up. After using a few night clubs for arenas Todd Gordon and Paul Heymen began hosting shows in early 1993 in a small building in South Phila, which was legally called Viking Hall (used for midnight bingo) became known as the ECW Arena.

The wildest, hardcore and scientific wrestling matches ever in U.S. history would took place from 1993-2001 in the ECW Arena. But it also produced many young rookies which must admit got their start in the most famous bingo hall in wrestling history. The late 1990’s and early into the 21st century saw financial changes in the world of wrestling. We saw the end of many promotions , though WWE (formerly WWWF/WWF) traveled thru just by the skin of their teeth and continue today, ECW fell victim to a term that many a business face, bankruptcy. Being birth of hardcore promotions, a few independent groups began and using the ECW Arena hoping to succeed where ECW ended. The small building is still being used today (2004) as well as the Wachovia Center, where WWE continues to use Philadelphia as a taping capitol.

Next: A look back at Philadelphia’s TV History of Wrestling.