Home / Columns / AS I SEE IT: The Daniel Bryan Saga

AS I SEE IT: The Daniel Bryan Saga 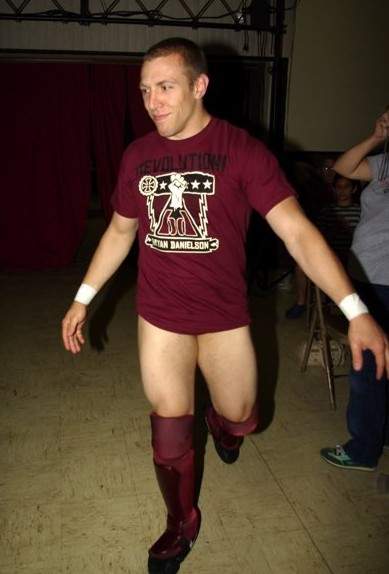 I hope one thing that happens with this rebranding is a way in which wrestlers like Bryan Danielson …be used the right way. When Vince McMahon finally took a chance on presenting a unque character … and let CM Punk be CM Punk, it worked pretty well…. I hope McMahon lets someone like Danielson, a character who actually uses submissions and brags about being “best in the world” actually use the gimmick people know Danielson for using.

Looks like McMahon’s not starting very well. Neal Jones at InYourHeadonline.com reported last Friday that there’s already been a minor name change of Bryan Danielson this past week on Florida Championship Wrestling to “Daniel Bryan”.

Before I get the usual message board whining and e-mails, I understand that even Nigel McGuinness didn’t care as much as most fans about TNA doing the same thing to him by changing his gimmick to “Desmond Wolfe”. Hell, Danielson probably would let himself be called “Meat Loaf” if he gets a push and a paycheck (having Edge come down to a FCW show and make the save for you doesn’t hurt, I suppose). But I swear that Vince McMahon does the gimmick changes just to show that he can. He pulls recognizable entrance music as he did with Sandman, just to show that he can.

How about just leaving certain unique characters ALONE…and letting them be what it is that got them over tin the first place? If WWE/TNA has a better character (D’Angelo Dinero is one example of when major promotions recently have), fine. But most of the time the people who will first off care about a character remember him/her for a character, so how about letting react to what it that they liked?

In other news, as part of a weekend that saw CZW celebrate the promotions 11th anniversary (God; it can’t be that long since I first went to that warehouse in Mantua, NJ), the promotion estalished TV on Philadelphia area informercial station WMCN. The station has wide clearance in the Philadelphia market as seen here:

Oddly enough with this pickup, CZW will have better TV coverage in the Philadelphia market than Ring of Honor which taped its TV in Philadelphia for HDNet, a station which has no cable clearance in Philadelphia (it is carried on Dish Network and DirecTV).

Wrestling website Diva Dirt is continuing the effort to put together a friendly competition among wrestlers on Twitter to raise money for the people of Haiti which was struck by a tragic earthquake earlier this week. As part of the competition, they ask all wrestlers to tweet to their followers to send a donation via PayPal to [email protected].

How to pledge via PayPal:

1. Log in to your Paypal account or sign up for one.
2. Click on the “Send Money” tab.
3. Type [email protected] in the “To” field and enter your pledge amount into the “Amount” field.
4. Choose how you wish to send the payment [it’s advised to send it as ‘personal’ and ‘gift].
5. On the confirmation screen, you will see “Email to recipient”” which shows something similar to the image below. In the “Message” field type in the name of the wrestler who you are pledging in support of. As you can see in the example below, the pledge is in support of Awesome Kong.
6. Click “Send Money” to send your payment!

All pledges will be sent to the American Red Cross Haiti emergency appeal fund. Please spread the word to your favourite wrestler on Twitter and ask them to get involved!

You can also donate to these well-known charitable organizations: