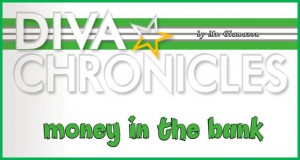 Can Kaitlyn be Money in WWE’s Bank?

I wasn’t sure what to write about this month.  Honestly I wanted to write about something OTHER than AJ Lee.  I mean, we already know she’s white hot right now and square in the middle of a huge storyline.  So really there’s not much more to say.

Looking up and down the roster it’s kind of hard to find an actual wrestling angle to write about.  Layla is carrying the Divas title but no one other than Beth seems to be a credible challenger, especially with Kelly going on casting calls (you know the division is a little thin when Kelly Kelly isn’t a top challenger…and that’s a bad thing).  I think Eve is fine in her executive role and Rosa has settled in nicely as a manager. The other girls like Natalya and Tamina are kind of just there to fill out the roster.

I could write about Kharma unceremoniously leaving WWE but that’s just depressing.  Wow, what went wrong there?  When reports surfaced that Sara Del Ray signed a contract this seemed to be a sign that Vince wants to bring in more traditional female wrestlers.  In other words…not models.  The division has been stung by the recent departures of Maryse, Maxine, and the Bellas…all leaving in part because they can find work outside of a wrestling ring.

Maybe Sara signals a changing of the guard.  Maybe she will just help train the future Divas by lending them her experience and skill.  But it’s hard to get too excited when things didn’t work for Kharma.  I’m cautiously optimistic.

Once girl I think can really benefit from more instruction, more teaching, and more ring time is Kaitlyn.  I still have high hopes for her.  Since winning season 3 of NXT her career has been filled with starts and stops.  You would think winning NXT would show the WWE had big plans for her (well, as much as they have big plans for any of their girls…).  But it seems like Kaitlyn just can’t find her groove.  At least not yet.

I met Kaitlyn in Atlanta before Wrestlemania 27 and she made quite an impression on me.  She is striking in person, even more so than when you see her on TV.  She’s got a great look, no question.  But what really struck me was her outgoing, fun personality.  I watched her take pictures and sign autographs and she was completely comfortable in the middle of all the attention.  Adding in her decent ring work I came away thinking “Kaitlyn can be something here in WWE.”

During this past month’s “Money in the Bank” pay-per-view AJ Lee was obviously the Diva in the spotlight.  However some of the other girls were booked as well.  Layla’s team got the victory over Beth’s team (booo) in a match that many people felt was “average” because it really didn’t do much for the champion or her main challenger.

But it did do something for Kaitlyn.  Sure she was on the winning side, but more importantly she participated in her first WWE pay per view.  That in itself is quite an achievement.  Think about all the guys and girls who would give anything to work a WWE show, much less a high profile show like “Money in the Bank”.

“The Diva Chronicles” are published every month in HONOUR magazine, the #1 online magazine devoted to women’s professional wrestling.