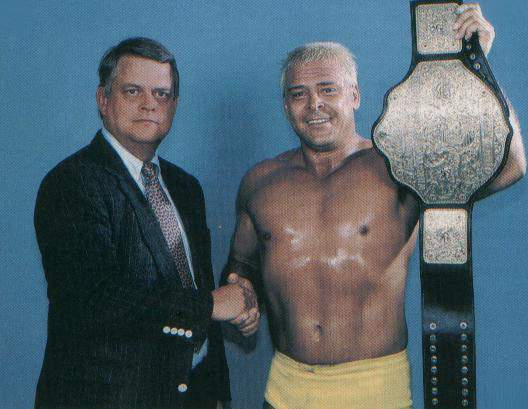 Note about Photo: “Rugged” Ronnie Garvin, who had wrestled the NWA World Heavyweight title away from Ric Flair just a few months before, went into the event with the championship, and the much-anticipated rematch!

In this day and age, any pay-per-view is considered by those within the business as a “supercard”. Unfortunately for wrestling fans these days, a supercard is rarely all that super. To enlighten the newer fans as to what the term “supercard” once meant, I will analyze perhaps the greatest supercard of them all, in my opinion, the NWA’s Starrcade ’87: Chi-Town Heat event. On November 26th, 1987, Thanksgiving night, a sell-out crowd in the UIC Pavilion in Chicago, IL saw perhaps what is arguably one of the greatest events of all time. This event certainly made an impact on me, as I still have yet to ever see a match that will rival the pops received in even some of the undercard matches on this event. The buildup to the event itself was almost a year long affair. Falling on the heels of Jim Crockett’s purchase of Bill Watt’s UWF, this event promised many great matches, including a few interpromotional matches.

In the opening match, the team of Eddie Gilbert, Rick Steiner, & Larry Zbyszko wrestled the team of Sting, Jimmy Garvin, & Michael “P.S.” Hayes to a time limit draw. This match was a semi-big deal, as Sting had recently turned face and began feuding with his former teammates, Gilbert & Steiner. This was the first interpromotional match, as Sting, Gilbert & Steiner had been with the UWF up until that point. This was a huge coup for the NWA, as all of you know that Sting eventually would become a mega star within the business, and this match was one of the first Sting wrestled as a fan favorite.

The second match saw UWF Heavyweight Champion, Steve “Dr. Death” Williams defend his championship against the UWF Western States Heritage Champion (the only UWF title the NWA kept after the event), Barry Windham. This was a rare “good guy vs. good guy” encounter, that saw Williams pin Windham to retain his championship. Not exactly a classic match, but definitely worth watching.

The card from here on out was nothing short of unreal in terms of the crowd being into it.

Up next was The Rock ‘n’ Roll Express vs. The Midnight Express in a Scaffold match. For you younger readers, a Scaffold Match is where two wrestlers or teams fight on top of a platform some 15-20 feet above the ring. While nowadays thought of as archaic in the business, at the time, this match was red hot in the NWA. They used it at Starrcade ’86, and felt they needed to do it again in ’87. Any time the Rock ‘n’ Rollers and the Midnights got together, the chemistry they had with each other and with the crowd made the match a success. By all means, the match wasn’t that great, but the crowd ate up every minute of the match that even featured Jim Cornette taking a very famous and dangerous fall from the top of the Scaffold! 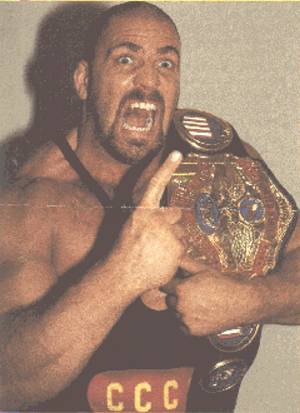 Up next is possibly my favorite match of all time. In late ’87, after the UWF-NWA merger, the only champion vs. champion match would be Nikita Koloff, the NWA’s Television Champion, vs. Terry Taylor, the UWF Television Champion. One Saturday night on TBS, I remember Nikita being ambushed after a match by Terry Taylor, who had stolen Nikita’s belt, and promised victory at Starrcade. Nikita was quite possibly the most over guy of the entire night in Chicago, aside from Ric Flair. The match had perfect psychology, with Taylor and his manager, Eddie Gilbert, repeatedly double teaming Nikita throughout the match behind the referee’s back. The conclusion of the match saw Nikita grabbing Gilbert, who was attempting to choke him, and sending him into a charging Terry Taylor. While Taylor regained his feet, Nikita hit his signature clothesline (that’s right kids, a clothesline), the “Russian Sickle” to what has to be one of the biggest pops of all time. The only other pop I can think of that beat that one out was the one after the ref slapped the mat the third time and Nikita had won the match. While not remembered for being one of the most popular guys in the business, Nikita had the most impressive crowd reaction of the night (again, aside from Flair). I cannot emphasize how impressive the crowd’s reaction to Nikita’s win was. You absolutely have to watch the match. Every time I do, I get goosebumps.

Up next, Tully Blanchard & Arn Anderson defended the NWA Tag Team Titles against the Road Warriors, Hawk & Animal. This match was very solid, and the only downside to it was the ol’ “Dusty Rhodes’ Finish”, where the Road Warriors seemingly had the titles won. A second ref had entered the match after the first ref was knocked down. A three count was made, and the Road Warriors had the belts…until the first ref got up and disqualified the Road Warriors because Animal had run into him, and returned the belts to Tully & Arn. Again, the crowd ate it up, and reacted exactly how they were supposed to.

Next, Lex Lugar defended his United States Championship against Dusty Rhodes in a steel cage. If anyone ever doubts how over Rhodes was, they need to watch this match. Rhodes had the crowd eating out of his hand, and it didn’t hurt his popularity any with the fact that Lugar was probably at this point more hated than Flair (at least in Chicago on this night). The match ended with J.J. Dillon tossing a chair over the cage for Lugar, and Lugar getting DDT’d onto it by Dusty when he bent down to pick it up. A three count later, and Dusty had won what would prove to be his very last NWA Championship. 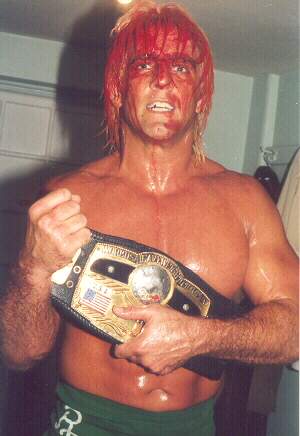 In the main event, Ron Garvin defended the NWA World Championship against Ric Flair in a Steel Cage. Two cage matches in a row! Anyways, while Garvin was supposed to be the fan favorite in this match, his lack of charisma almost forced the fans to eventually start cheering for Flair. That’s not to say Garvin wasn’t a great wrestler, or even a great champion, but he’s no Ric Flair. On this night, Flair again would escape with the gold, bringing the crowd to their feet in thunderous applause for the effort put forth by both men.

Overall, the crowd on this night was perhaps the greatest crowd I’ve ever seen, live or otherwise. It rivaled the old MSG crowds where Bruno Sammartino defended his WWWF Championship. With only seven matches to the card, it was definitely a challenge for the NWA to step up and deliver, but they did more than that. On Thanksgiving night 1987, they made history with one of the greatest Supercards in wrestling history. Much better than the WWF’s outing for that night, the very first Survivor Series. If only the NWA had kept putting out matches of this quality, they would have continued to sell out arenas, and not go through their horrible early ’90s slump. Like Jim Cornette said on the Monday Night Wars DVD, the old NWA was selling out shows like mad to crowds of at least 12,000, but as soon as they turned over to WCW and were bought out by Turner, they had trouble getting 3,000 people a night. If the NWA had remained as strong as they were on this night, the WWF would have been in a lot of trouble much earlier on.

Related Items
← Previous Story A Message To Wrestlers With OWW Profiles
Next Story → HEY YO. Enough is Enough with Scott Hall