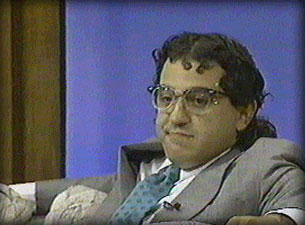 Jack and OneInchBiceps were joined by Jameson of the Bobby Heenan show in WWF and manager of the Bushwhackers. It was his first interview in 18 years and possibly his last one. He was in character!

Jack asked Jameson what was like to out of the spotlight for 18 years and people still after you? Jameson said it felt great and previously working in a golf driving-range when someone noticed him and he was phoned all the time. Jack asked if he had the same clothes? Jameson said he has and they have been washed in the last eighteen years. Jack asked what was Bobby Heenan like on the show? Jameson said he was a right dick on the show, he said he was very rude and he didn’t like them. He would smack him around and treat him very badly. He played very horrible jokes and cried because of it, but Vince liked him.
Jack decided to take a call and William Phoned in: William asked: What was his highlight of his career? Jameson said he had so many and had to think about it: When he was thrown of the roof by a nurse. Macho’s man bachelor party where he met a stripper! Jack asked if the Rosati sisters did anything special? Jameson said she kept him very clean and did almost everything. Jameson started to cry and swear when Jack asked about his mother.
Jack asked what Vince like was behind the scenes: Jameson said he was a real gentleman and a class person unlike his employees, Jameson said “Mene” Gene Okerlund was a great person as well and they would go to a strip joint. Jack asked if the Chinese food gave him memories of Mr Fuji? At that moment JAMESON VOMITED ON HIS SHOE, it was his Chinese food! Jameson said he wasn’t fond of Mr Fuji. Jack asked if Brutus the Barber beefcake gave him a haircut ? He said no but the WWF kept him away from them, but had a bone to pick with Ted Di Biase Sr who did a lot of bad stuff to him. Andre the Giant saved him from still talking to him now.
Jameson asked his views on the old ECW? Jameson said he can’t spell ECW and gave up on television at the end of the century so he didn’t watch must. He did get a call from WCW and was going to be a original member of the NWO. Jameson loves smoking after Chinese food. He smokes tobacco. He said in the eighties weed was around him all the time and it wasn’t a good experience because no one gave him anything.
Jack asked when Jameson managed the Bushwackers were there any managers he tried to emulate? Jameson said Miss Elizabeth. Jack asked if he had wore a dress? Jameson said no and Jack gave him advice that he would need to wear formal clothes at this upcoming fan fest, he brought a new t-shirt and sweatpants.
“Playboy” Don Douglas asked if Jameson had any advice for aspiring managers? Jameson said the wrestlers that you manage are younger then you. Jack asked why there wasn’t a Jameson action figure? He said he is not sure. Jack asked his thoughts on Gorilla Monsoon? Mentioning that name brings a tear to his eye,a real gentleman and Hacksaw Jim Duggan respected him as well as Hulk Hogan who stood up for him. Jameson said he was around when Chief Jay Strongbow but he wasn’t wrestling.
Jack thanked Jameson for being on the show, he vomited three times live on the show thanks to some Chinese food! Jameson said he more stories and loved IYH because they are relaunching his career!
Interview Time: 53 Minutes and 37 seconds.
Check it Out:
– InYourHead welcomes this week “Dangerous” Danny Davis. Also coming up “Mene” Gene Okerland and Trina Michaels!
– New England Fan Fest 2 with Jameson’s first ever convention appearance
Saturday May 21st 2011
Brotherhood of the Holy Ghost Charity Hall
59 Brightridge ave / East Providence Rhode Island
RHODE ISLAND`s FIRST AND ONLY PRO WRESTLING CONVENTION!!!
Visit our website for all updates and prices/ Hotel info/ Directions etc..
http://www.nepwhof.weebly.com
– Bob Colling’s http://wrestlingrecaps.wordpress.com/
(Over 840 shows have been recapped including WWE, WCW, ECW, TNA, ROH and other independent companies!)
-Check out youtube.com/jackIYH for past interviews.
-Join the IYH fan message board http://inyourheadboard.proboards.com/index.cgi
– for full audio please visit:
www.inyourheadonline.com
Podcast:
http://inyourheadwrestling.podomatic.com/
Subscribe in iTunes:
http://itunes.apple.com/podcast/neal-jones-podcast/id385508745