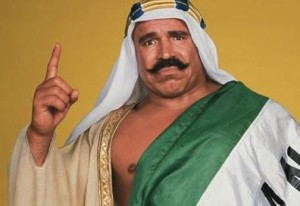 In an expletive interview, WWE Hall of Famer The Iron Sheik spoke with NBC’s Matthew Kitchen on a number of topics, including this year’s USA Olympic wrestling team. Here is the interview:

A signature move and name Jordan Burroughs could use: “‘The Jordan.’ Not like the Michael Jordan but he still the Real American. He can break the pinkie finger like Sheikie. He break people back with his pinkie. Because he a big strong [expletive] for America. I be happy. His name could be “the Real” and his finisher be “the Humble.” Give me a hell yeah!”

Ellis Coleman’s nickname “Flying Squirrel”: “Flying squirrel remind me of Ultimate Warrior because he a little rat when he jump in ring like that idiot Jose Canseco or Mel Gibson. I would never respect the squirrel because the squirrel have no [expletive].”

If he could beat any of the current Team USA members: “In my day I beat living [expletive] out of all Olympian who challenge the legend. I put them in a camel clutch, break they back [two or three expletives], and make them humble. But now I am not in same shape as before so I don’t [expletive] with them.”

How would the Olympics would benefit from adding ropes around the mat: “The rope protect you and you cannot run away like little [expletive] in ring like Jose Canseco.”

How Hulk Hogan would do against the current Olympic team: “Hulk Hogan don’t last long like because [a few expletives] he not a real man like the Sheiky baby. He get beat bad like [wow… not printing that] and never make it to Olympics. Only for the Olympics for being [or that].”

If he’s ready for a comeback: “I know if I training I can beat the [expletive] out of anybody who [expletive] with me. I am the real legend not like the jabroni the Tom Cruise.”

The the current American wrestling team: “They all workers but need to pay their due to be legend like Iron Sheik. Buy my [expletive] shirt!! USA #1!”