Home / Indies / The Kings of Wrestling on MNM Radio

The Kings of Wrestling on MNM Radio 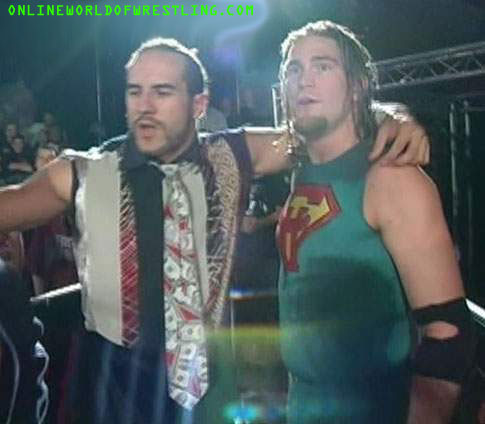 Chris Hero & Claudio Castagnoli Discuss Why The Kings of Wrestling vs. The Briscoes Is The Tag Team Feud Of The Year (And Not Beer Money vs. The Motor City Machine Guns), Why They Have More To Lose In Their Match With Shelton Benjamin & Charlie Haas At Ring Of Honor’s Glory By Honor IX (And What Fans Around The World Can Expect In Their Forthcoming “Dream Match” on September 11th), Plus How Impressed They Have Been With The Way Cary Silkin Has Handled The Company Since The Announced Departures Of Tyler Black & Adam Pearce (And Cary’s Receptiveness To The ROH Fans)

The Ring of Honor World Tag Team Champions, The Kings of Wrestling (Chris Hero & Claudio Castagnoli) were two of the special guests on this week’s live edition (08/30/10) of the award-winning Monday Night Mayhem (presented by Good Health Natural Foods). You can feel The Mayhem live every Monday night (at 7PM ET/6PM CT), exclusively on The Monday Night Mayhem Radio Network (www.MondayNightMayhem.com).

Chris & Claudio joined The Big Mosh, Jimmy Noonan, & “The Chairman of the Board” Todd Vincent for their first joint appearance on “Your Home of Wrestling Radio” (to promote Ring of Honor’s return to Internet Pay-Per-View, Glory By Honor IX, on September 11th at The Manhattan Center in New York City), which is now available in Windows Streaming Media or via Monday Night Mayhem’s official Podcast on iTunes:

What wrestling fans around the world can expect when The Kings of Wrestling collide with Wrestling’s Greatest Tag Team (Shelton Benjamin & Charlie Haas) at Ring of Honor’s Glory By Honor IX in New York City on September 11th and why they feel that they have more to lose in the match then Benjamin & Haas: (Chris) “The first thing I hope is that the two of them got on You Tube or got some DVD’s and watched us in the ring, because I’m not quite sure what their vision of independent wrestling is, especially Shelton because Charlie Haas came from the indies. I don’t think they quite know how big we are & how unorthodox we are in the ring, so hopefully they watched a match or two, and they kinda know what’s in store for them. I’m looking forward to seeing Claudio throw both men around, because I don’t think either of them has been tossed as easily, especially in the last couple of years.” (Claudio) “It’s going to be interesting, Shelton is a great athlete, but I think he has found his match. We have plenty of things in store for Charlie & Shelton, I don’t think they have ever been as hit as hard as we’re gonna hit them on 9/11. I don’t know if they will be ready for that. They probably think the indies are a bunch of small guys that don’t know what they’re doing, and they could just come in & bully us around. I think we have more to lose in the match than they do.” (Chris) “Everybody is gonna be looking at them as the team that’s ‘been there and done that,’ and we’re the guys that are kind of on the rise. So it’s really important to make sure we carry ourselves in the right way and look like we belong in the ring with them. I have no fear of that. You’re going to see a lot of innovative tag wrestling, you’re going to see a lot of power wrestling out of Claudio, you’re going to see some strikes out of me. Those two guys (Benjamin & Haas) bring the athleticism. I don’t think they’re idiots. I don’t think they would have signed for this match if they had any doubt in their mind about coming into this match in shape. It’s going to be a spectacular match any way you look at it.” (Claudio) “I think it’s not the question if we belong in the ring with them (Benjamin & Haas), the question is do that belong in the ring with us? And that’s what they will have to prove.”

Chris’ theory on the differences between what him & Claudio are wrestling for and what he believes Benjamin & Haas are wrestling for at Glory By Honor IX: We’re wrestling for pride…clearly. We’re at the top of the Ring of Honor mountain. There are these challengers coming in, just of taking a chink out of our armor. You’ve got those guys who are just going to be happy teaming together again. They’re going to be happy to get in the ring and move around like they used to. They might not be looking for anything further. The Ring of Honor tag belts probably don’t mean much to those two guys. So once they get in the ring, they start feeling it out a little bit, they’re going to get a little happy, they’re going to get a little complacent, and I’m sure the fans in Manhattan are going to give them a wonderful reception. Once that happens, they are going to get way too comfortable. And then that’s when Claudio & I come in with the advantage. Everybody thinks they have the advantage cause of their size & experience…that’s definitely not the case. That’s going to cause Claudio & myself to be even more aggressive.”

Why they feel that they are the best overall tag team in the world right now & why, in their estimation, the feud of the year in tag team wrestling is not Beer Money vs. The Motor City Machine Guns, but The Kings of Wrestling vs. The Briscoe Brothers: (Chris) “Claudio & myself can hang with anybody. You can take a look at our 2010 reign, look at the matches we’ve had. We can go all the way back to January when we were in Pro Wrestling Noah’s Global Tag League, and watch how we took it to Kensuke Sasaki & Takeshi Morishima. Claudio took 400 pound Moreshima and spun him around like a helicopter. But at the same token, we come back in the states, and we have matches with The Young Bucks; we have matches with The Motor City Machine Guns; we have a bloody, bloody brawl with The Briscoe Brothers. I’m 100% confident when I say that Claudio & myself are the most well-rounded & best overall team tag team in the world right now.” (Claudio) “I think The Kings of Wrestling against The Briscoe Brothers is the feud of the year, because the matches we had with them over the extent of time with the storyline & everything built in…that’s the complete package. That’s what people should be watching and should be excited about. If you’ve seen the matches, you would completely agree with me. That’s no knock on either Beer Money or The Machine Guns, who we had a great match with (many say ‘Match of the Year’ contender) in New York the last time Ring of Honor was there.”

How impressed they have been with the way ROH President Cary Silkin has handled the company since the announced departures of both Tyler Black & Adam Pearce, along with his receptiveness to the Ring of Honor fans: (Claudio) “I’m always proud to be part of Ring of Honor. Sometimes the company changes, and we’ll see what happens. I’m really excited as is anybody that has anything to do with Ring of Honor. The future looks great, and as you said, ROH is fan accessible by the day, which I think is great in the world today. I’m really happy that Ring of Honor & Cary has taken advantage of the medium. I think it’s definitely a really exciting time to be involved with Ring of Honor.” (Chris) “As Claudio said, clearly we’re proud to be a part of Ring of Honor because of the in-ring work, but aside from that, behind the scenes (from the ring crew, to the guys that set up the lights, to the guys that run the merchandise booths, to the guys that are filming with the cameras on the floor, to Cary, to Sid, to security). Ring of Honor from the top to the bottom, every employee, it’s like a family. Everybody gets along, and everybody respects one other. Cary is in this because he was a wrestling fan, because he had that passion & that love for wrestling, so he’s going to do everything in his power to make sure for the company to succeed…and not just succeed, he wants the fans to enjoy themselves. Our website is going to be more interactive, and there are a lot of good things on the horizon for Ring of Honor, and we’re all very excited.”

More is contained in this exclusive interview with The Kings of Wrestling, including their candid thoughts & comments on why the ROH World Tag Team Titles are the most prestigious titles in North America currently, the strength of the promotion’s tag team division right now, plus so much more! Follow the hottest tag team in professional wrestling right now on Twitter (at www.Twitter.com/TheChrisHero & www.Twitter.com/CCastagnoli). Be a part of Ring of Honor’s return to the Boston area on Friday, September 10th, as Chris Hero & Claudio Castagnoli defend their ROH gold against Colt Cabana & El Generico. Log on to www.ROHWrestling.com for complete details & for ticket information. For those who can’t make it out to “Beantown,” follow all of the late breaking news & get the results from the event by following Ring of Honor on Twitter (at www.Twitter.com/ROHOnHDNet) & on Facebook (at www.Facebook.com/RingofHonor). And don’t forget that all roads lead to the sold-out Manhattan Center in New York City the very next night on September 11th, as ROH returns to Internet Pay-Per-View! The only place to see The Kings of Wrestling square off against Wrestling’s Greatest Tag Team (Shelton Benjamin & Charlie Haas) is on www.GoFightLive.tv. Order Glory By Honor IX right now, and witness one of the most important & emotional nights in Ring of Honor history!