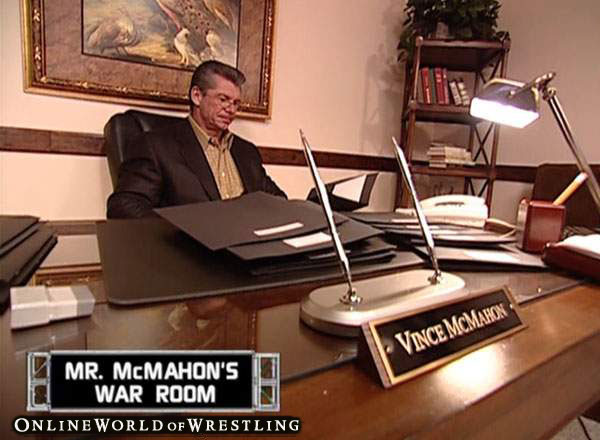 During the June 16th edition of the Countdown To Raw show on The Score in Canada, host Glenn Schiiler interviewed Vince McMahon. Below are some of the comments.GS: Canadian fans aren’t eligible to win your millions, but I think people in this country still want to know. How did this idea come about? Did you just wake up one morning and say “You know what? I feel like giving away some money!”?

VM: Quite frankly, that’s about it. I mean the things that come out of my head sometimes…sometimes even I can’t believe them and this is not necessarily one of my better ideas, giving away my personal money, and it’s a total of a million dollars every Monday night. Last week, we had one lady from Texas win $2 and we had another gentleman from Wisconsin win $250,000 and I must admit it gave me more pleasure to give away the $2 than it did the $250,000.

GS: You can see why people may think you’re vindictive or mean-spirited when you get more joy out of the $2.

VM: No, I don’t think I’m vindictive at all. It’s just what I enjoy.

GS: You said you want to attract new fans to your product with this giveaway, but you’re also inviting back former fans who have tuned out over the years, so I ask you this…what does the WWE product of 2008 have to entice people who watched during the Hulkamania years or during the Attitude era when superstars like Steve Austin and The Rock were on top?

VM: It’s a different program and, at the same time, it’s very similar. It’s still an action adventure. It’s still…I won’t use the word comedy, but we do humor. It’s still a rock ‘n’ roll environment. It’s still a soap opera. It’s still action in terms of athleticism…so it’s all those things and there’s nothing like it on television. It’s a variety show for sure. We’ve been in business for a zillion years and, every Monday night on USA and on The Score, we’re there. We travel all over the country…a matter of fact, all over the world, producing and we’re live every Monday night and there’s so few shows like that. A matter of fact, we have more episodes than any prime time episodic program ever and that includes Gunsmoke and Lassie and things of that nature. We’ve blown away everybody. We’re like 750 some odd episodes and counting.

GS: You’re bringing back the WWE Draft, which is coming up next week on The Score. What was behind that decision?

WM: We don’t do that necessarily every year, but I think we will in the future. It shakes things up. It refreshens the product and we have some major moves planned. It’s a good thing. I think everyone looks forward to that because you don’t know where the superstars or your favorite ones are going or which ones are coming, which issues are resolved, which ones are left open, so it’s an exciting show.

GS: This is a question we have asked WWE superstars in the past and I’d like to get your take on it. Often times it seems that the media only shows a genuine interest in wrestling when there’s a tragedy or a negative event, yet when the WWE does something positive like the annual Tribute To The Troops show, a large portion of the media won’t cover it. Does that bother you or do you just accept it at this point?

VM: Well, the media can go screw themselves. Having said that, we’re making an effort to be more media-friendly, but I don’t know..I think we’re a little too defensive. All of us enjoy this product from time to time and, yeah, we don’t get the credit that we get, but that’s life sometimes. Life is not necessarily fair, but we’re trying to be more media-friendly and educate the media on who we really are and what sort of wonderful product this is and who are our fans and I think once the media finds out, more specifically, who supports us, who our audience really is, then they’ll begin to understand.

GS: You have a reputation for being an extremely hard worker and this industry is a passion of your’s, obviously. How long do you see yourself continuing to do this?

VM: I’ll probably live somewhere beyond 100 and, every day that I do, I’ll be in this business. I love this business. I’m third generation in this business. It really is in my soul and I love to perform. I love to entertain and that’s what all of our performers love to do. You can’t give your audience enough and they can recognize that and appreciate that, so again, it’s a love of what I do. I mean I always say I never go to work because nothing I ever do is work.