THE SHAKY ROAD TO WRESTLEMANIA? 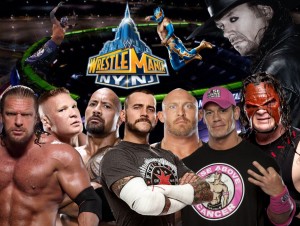 THE SHAKY ROAD TO WRESTLEMANIA?

WHO WILL HEADLINE THE SHOWCASE OF THE IMMORTALS IN 2013?

Wrestlemania has become more than a sports entertainment extravaganza. It has become somewhat larger than life. It seems to be on par with the Olympics, with cities bidding to play host to this major event.

As a result of its popularity WWE needs to ensure that Wrestlemania lives up to the hype and surpasses past Wrestlemania events. Like last year when John Cena faced The Rock. Two faces of WWE in their respective eras, two men who have carried the company and the business. They are two charismatic, entertaining and talented superstars. Combine this with an end of an era match with Triple H, a thirteen time World’s Champion, and the Undertaker, who has never been defeated at Wrestlemania, inside the demonic Hell in a Cell, and Wrestlemania was one that won’t soon be forgotten.

Now we get ready to travel that all too familiar “Road to Wrestlemania”, but who will main event next year’s “grand daddy”. Will the once in a lifetime match become a twice in a lifetime attraction? Will Triple H look to get revenge against Brock Lesnar for his loss this past August at SummerSlam? What will current WWE Champion, CM Punk be doing at Wrestlemania?

Several chains of thought as to what we can see next year at Wrestlemania. Let’s start by looking at the current platform of WWE. CM Punk is closing in on one year as the company’s champion. He is outspoken, phenomenally gifted in the ring and a character fit to headline Wrestlemania. Sheamus has been the World’s Champion since Wrestlemania and the company seems to be investing a lot into the Sheamus character and his push will seemingly continue. John Cena might have undergone surgery, but he is very much still alive and he is still the face of WWE. His match last year with The Rock could make him a front runner in the race to headline next year’s event. The Rock will be making his return to the WWE this January at the 2013 Royal Rumble pay-per-view event. He will challenge the WWE Champion, who many along with me believe will still be CM Punk at the time, for the title. Undertaker has become a fixture at Wrestlemania, and with the streak now sporting an impressive 20-0, the Undertaker could be looking for a big match at the biggest event in sports and entertainment. Many have been calling for Stone Cold Steve Austin to make a return and have one more match at Wrestlemania.

I can’t see any reason why punk would drop the belt heading to the Rumble. Let’s say he loses the belt at Hell in a Cell or Survivor Series, then The Rock returns at the Royal Rumble in January, then John Cena or whomever takes the belt from CM Punk at Hell in a Cell will have a short lived title reign, and the purpose of carrying Punk as champion this long will be a wasted exercise. So I have to believe that Punk vs. Rock at the Rumble for the WWE Championship is the match we will see.

Expect The Rock to win the WWE Championship at the Rumble, no matter who the holder of the championship is. The company won’t bring The Rock back if they aren’t planning on putting the strap on him. I also think it’s a forgone conclusion that The Rock will headline Wrestlemania as WWE Champion. I do feel he will drop the belt at Mania, but the question is to whom?

A big thought is that John Cena will be the one facing The Rock for the WWE Championship at Wrestlemania, John Cena has not held the title in a long time and with possible Wrestlemania revenge in mind, this could be the match that we all can expect to see.

Where does that leave the current champion, CM Punk, though? Well one thought is that the match could become a triple threat match. CM Punk vs. John Cena vs. The Rock for the WWE Championship. I see merit in this match. They are three names who represent the business best. However, I would rather see the WWE Championship be competed for in a one on one scenario.

Another chain of thought is that Punk could face Stone Cold Steve Austin at Wrestlemania, while this would make sense given Punk’s new attitude change. Stone Cold is a very much over babyface persona now. However, chances of Austin being ring ready by Wrestlemania seem very slim at this point in time.

Brock Lesnar is a big topic on all fans minds, following his intense encounter with Triple H at SummerSlam, most fans are left wanting more. Brock Lesnar’s main attraction is the fact that he is an ass kicking machine, with a mash-mouth, in your face, intense fighter style. But with SummerSlam’s outcome many are asking whether a Triple H/ Brock Lesnar II match might not be out of the cards.

Other thoughts go that Undertaker may come back to challenge or be challenged by Brock Lesnar. It’s a dream match, and one where fans could get the maybe Undertaker could lose the streak this time feeling that is the only reason worth putting Undertaker in a Wrestlemania match at this stage as far as I am concerned. Though given the condition of The Undertaker, several people feel that perhaps he won’t have a match at next year’s event.

WWE has been teasing a match between Ryback and CM Punk. Some feel that this match could be saved for Wrestlemania, in an attempt to help put Ryback completely over. While I find this match unlikely to occur, I don’t think it’s impossible to see Ryback vs. CM Punk lock horns.

WWE seems to be investing a lot into Sheamus. He has been pushed and has been champion for a while now. There has been talk in WWE of having him take on Brock Lesnar at Wrestlemania, though I find this unlikely as well. Chances are he might face a younger talent looking to be put over at Wrestlemania, but we will have to wait and see.

Rey Mysterio and Sin Cara may be teaming right now, but I have no doubt that the two will be a part of the grand stage of Wrestlemania as opponents. It’s a dream match for fans and something that everybody would want to see. Rey Mysterio and Sin Cara are largely thought of as the two best lucha libre styled competitors in the world. It would be a treat for the eyes to see these two start flying at Wrestlemania.

Kane and Daniel Bryan are the current WWE Tag Team Champions. Team Hell No have each been the World’s Champion and have been headliners. At the moment the two share the Tag Team Gold. I see this team holding the belts for a while to heat up the tag team division and then I see a big implosion coming that could lead to Bryan and Kane having a blowoff match at Wrestlemania.

No matter how you look at it, predicting next year’s Wrestlemania headliners could be more difficult than we have anticipated.  The list of contenders are quite a lot, and with the Rumble and Elimination Chamber events still to play a role in the road to Wrestlemania the possibilities are endless.

One thing is sure though, it’s going to take a lot to overtake this year’s extravaganza. Time will tell what the creative minds at WWE think up to entertain us and sell their biggest event of the year.

I must also make apologies for the long time period between my last column and this one. I have had quite a lot going down, personally and professionally. I can also report that XWE has been growing from strength to strength. This past Saturday we held our 1st ever Mall Brawl Show, and it surpassed my wildest imagination. A huge crowd, but more importantly a crowd that was alive, responsive and part of the show. When the show was over everybody wanted to meet the guys, and took photos with them by our banners. All round a huge high like feeling for all involved. This weekend we have the honor of doing it again. XWE joins some big names in South African music for a showcase. So I do apologize for not being as involved. But I can tell you I am busy doing research for a column to give fans a South African perspective on WWE stars Justin Gabriel and Leo Kruger, or PJ Black and Ray Borne as I remember them in South Africa. I will be talking to promoters and wrestlers who knew/know them and worked with them. It should be a fun and an insightful task.

Till next time, I am the voice of Xtreme Entertainment,

Related Items
← Previous Story OWW’s This Week In Wrestling – October 3, 2012
Next Story → AS I SEE IT – “Cage of Death” this weekend!