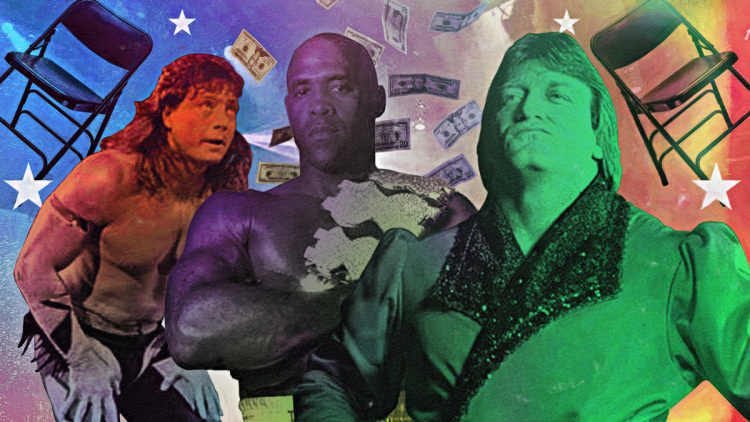 When the Rockers debuted on WWF television in 1988, there wasn’t much distinction between Shawn Michaels and Marty Jannetty. Michaels was two inches taller, but Jannetty was more mature — steadier in the ring and much looser in promos. But it wouldn’t last. By 1990, Michaels had emerged as the top Rocker: He had found some store of buried charisma and taken over chief promo duties while Jannetty languished, reciting the same trite lines (“We’re gonna rock and roll, strut and stroll”) and receding into his drawl.

When they came face to face on Brutus “The Barber” Beefcake’s interview show in 1991, the Rockers had been at odds onscreen for weeks. Fans like me were hoping to see their favorite team patch things up, but Michaels’s devilish leather jacket suggested something more calamitous. When Jannetty gave his partner a last chance to reconcile, you could almost hear the desperation in his voice: “If you wanna stick together and make this thing work, when I turn around we’re gonna shake hands, and we’re gonna go on and rock and roll like the Rockers can do.” Those were Jannetty’s exact words, but his message was “Please don’t leave me.” The same dynamic had been playing out in real life. The Rockers’ backstage relationship was strained — rumor had it that Michaels had sent Jannetty to get an offer from another company, only to act shocked when Marty mentioned it to Vince McMahon. Vince decided to split the tag team, and Shawn couldn’t have been happier. Marty freaked out. He wanted to keep the band together. He knew what the rest of us hadn’t quite realized yet: He was the second banana.

Second bananas in pro wrestling arguably date back to the sport’s earliest days of quackery, when touring champs would travel with “policemen” whom prospective opponents would have to go through before challenging for the belt. The most famous of this sort was Toots Mondt, who was one of pro wrestling’s greatest minds and a behind-the-scenes second banana to Vincent J. McMahon before his son, our beloved Vincent K., took over the family business.

Related ItemsFeaturedgrantlandthe rockerswwe
← Previous Story Undertaker vs. Sting at WrestleMania 32?
Next Story → 15 Former WCW “Where Are They Now?” Stories