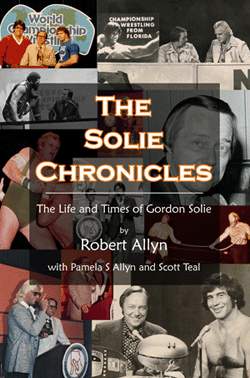 (Tampa, FL) – Since the late 1800s, professional wrestling has turned out many high-profile stars. But one of the most well-known personalities wasn’t even a wrestler.

He was a commentator and announcer named Gordon Solie.

Now author Bob Allyn, with help from co-authors Pamela S. Allyn (Gordon Solie’s Daughter) and Scott Teal, aims to enrich wrestling fans with the life and times of this legendary broadcaster, who died in 2000 at the age of 71.

Published by Crowbar Press, The Solie Chronicles takes fans on a wild ride behind-the-scenes in the world of professional wrestling.

All sorts of personalities make their way into Allyn’s book about Solie—everyone from wrestlers like Ric Flair and Dusty Rhodes and Hulk Hogan to “The Voice of Florida wrestling,” Shannon Rose.

Famous dead-pan style interviews and colorful play-by-play broadcasts of wrestling led to Solie’s induction into the WCW Hall of Fame (Class of 1995), the NWA Hall of Fame

It’s been said of Solie’s influence and stature, “Gordon calling a world championship match was like Al Michaels or Bob Costas calling a Super Bowl or World Series … just a perfect fit!”

Author Allyn says, “The background material for this biography was found in Gordon’s personal files and taken from interviews with the people who knew him the best. It’s written as a testament to a man who made his mark in many endeavors,” Allyn says.

The bulk of the book’s content is drawn from interviews with 65 people from all walks of life who knew Gordon best: family and friends; stock car drivers; professional wrestlers; referees and promoters; journalists; commentators, broadcasters, and photographers.

Born Jonard Frank Labiak on January 26, 1929, Gordon began working as a page and errand boy for a Louisiana radio station while he was in the U.S. Air Force. Known to his fellow servicemen as “Gordy,” he would later legally change his name to Gordon Solie, a name chosen to honor his family history.

In 1950, he took a job as an announcer for WEBK radio in Ybor City, Florida. By starting his own radio sports interview program, Gordon made key contacts in professional wrestling and stock car racing.

Subsequently, Solie set a course and made a major impact on the development of professional wrestling, along with being closely associated with national auto thrill show tours, stock car racing on Florida’s Suncoast, and ultimately, becoming the host for the highest-rated show on the largest cable network in America.

Excerpt from “The Solie Chronicles”

Gordon left WCW with a record of good performance, but he did leave an off-the-job situation hanging over his head. While still with WCW, the company changed Gordon’s flights from Delta to Kiwi. He wasn’t happy about the change. Not only did he and Smoky take vacation trips on Gordon’s Delta frequent flyer miles, but a lot of the attendants knew him. He was a regular and they treated him like one. They would make allowances if he occasionally drank too much, and perhaps even chastise him for lighting a cigarette on a plane.

“Gordon used to sneak a wet towel into the bathrooms on the airplanes,” said Harley Race. “He used to put the damp towel over the smoke detector and sit in the airplane restroom and smoke cigarettes. Gordon was the reason that the airlines added signs about not tampering with their smoke detectors.”

When Gordon learned that some WCW staff members were still flying Delta, he was doubly ticked off. Chip on his shoulder and all, Gordon got on a Kiwi flight and began belting down some drinks, and then fired up a cigarette. When a flight attendant began to reprimand him, she got a strong dose of verbal abuse from him. When airline personnel complained to WCW about Gordon’s behavior, someone at WCW filed that away in their memory for use at a future date.

If you would like interview author Bob Allyn, or Pamela S. Allyn (Gordon Solie’s Daughter) regarding the book please contact Bob Allyn at (770) 634-1528 or email [email protected]

Eclectic Media Productions was formed in 2007 by Shannon Rose. Our mission is to provide our clients with the best in Public Relations.

Our motto is “Your One Stop to Take You to the Top!”
http://mediaproductions.tv