Home / Columns / THE SURVEYOR OF THE STARS 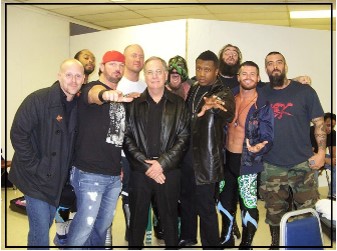 Bill Behrens insists his greatest discovery was one that he just stumbled upon.

Which is kind of funny, considering it may be the most Phenomenal Find in professional wrestling history.

“Discovering AJ Styles… was like going to a river and discovering water. Really, it’s not that you made that much of a discovery; it’s kind of obvious that it’s water,” Behrens joked in an interview with TheGorillaPosition.com recently, saying that Styles’ talent was apparent immediately. “In AJ’s case it was obvious that he was uniquely talented from day one.”

Behrens, a Miami native and the former promoter of the Georgia-based NWA Wildside promotion from 1999-2005, is often credited with launching The Phenomenal AJ Styles’ career. He has helped guide it, and many others, along the way ever since.

“What Allen (Styles’ name is Allen Jones) and I did together, was come up with a plan for his career,” Behrens recalled. “But, he always had the talent, and he’s stayed on that path. For all the talent that Allen possesses, you can also say that he’s a good person, a good husband and a good father. He’s followed that plan, in both wrestling and in life, remarkably well.”

Behrens first came across Styles right there in his own backyard, during his time running NWA Wildside, based out of Cornelia, Georgia. Styles was a homegrown, Peach State prodigy, and had the dedication required to excel in the ring.

Behrens arranged a trip to Australia for the short-lived World Wrestling All-Stars promotion, and  from there, Jeff Jarrett signed Styles to his brand new TNA Wrestling company. Behrens would be involved as well, helping the fledgling endeavor get off the ground, both on and off-screen. He would also be there to lend words of wisdom to the young grappler as he began performing for the first time on an international stage.

However, it wasn’t always the smoothest journey, Behrens insists. There were times when he and his young phenom would butt heads over the direction of Styles’ career.

“He hated me… At the beginning, anyway. And he’ll even tell you that. We’ve even said it in interviews, he will tell them, yeah, I hated Bill at first.”

“Now, I’m ‘Pa-Pa Bill’ and a surrogate father to the family. But, that took a while.”

Many casual wrestling fans may not even know Behrens’ name. And, unfortunately, the fans that do often refer to him as simply the ‘Guy who found AJ’. But to observers of the industry, Behrens’ depth and influence is much more than just one Phenomenal superstar.

As the the man behind SBI Bookings (Show Business Inc.), he now guides the careers of some of wrestling’s most prominent young stars, as well as many mat veterans. Diamond Dallas Page, Christopher Daniels,  and Matt Sydal are among the different generations of performers who have been under Behren’s guidance. One glance at the company’s website, and fans will notice names ranging from the up-and-coming Flip Gordon to former WCW star Glacier as part of the cast of characters that fill out Behrens’ roster.