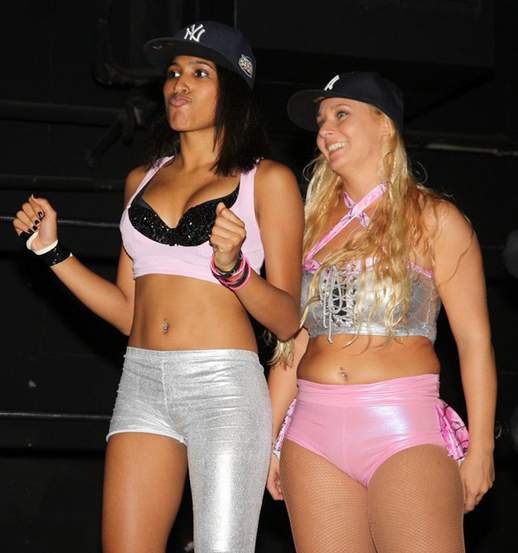 The story of the Belles Saints rise in WSU is a story that shows that with hard work & determination, dreams can be realized. WSU, which prides itself in seeing the future stars of tomorrow rise today, has always given chances to new faces. When the Saints made their debut in WSU at WSU’s 3rd Anniversary show, no one knew what to expect. This rookie tag team, who wound up being defeated by the more experienced Boston Shore that night, took a learning experience in the loss. The Saints realized that WSU for real and they would have to up their game to reach success.

The Saints, in 8 months time, made their debut in WSU & won the WSU Tag Team Titles.  The Saints, who are adored by the WSU faithful, wound up getting one of the bigger reactions on the iPPV for their title win. The Saints proved on that night that they were for real and a force to be reckoned with in WSU.

While you can not take anything away from the Saints title win, pundits looked at the chemistry of Cindy Rogers & Jana, as the reason for the loss. Rogers & Jana, members of the Cosmo Club, were showing signs of frustration with each other, as both members were losing matches individually.  It didn’t seem Rogers & Jana were on the same page anymore, and some critics thought the Saints defeated an unfocused Rogers & Jana.

After losing to The Saints, Jana & Roger’s frustration came out in the ring, as both shoved each other. The now former ex-tag team champions had to be calmed down by WSU Spirit Champion & Cosmo Club leader Brittney Savage in the locker room.

Things looked they were all settled until the “Martinez vs Rain II” event. “Pryme Tyme” Amy Lee was scheduled for a match with Latasha.  However, Lee, seeing what happened at the Breaking Barriers iPPV, called out Cindy Rogers. As insiders & fans know, Rogers & Lee are best friends outside of the ring and have traveled the road up and down together.  Lee said she doesn’t have much time left in wrestling but there is one thing she wanted to do and that was to be a WSU Tag Team champion again. (Lee previously held the titles with the now retired Taylor Wilde.) Lee said the Cosmo Club wasn’t really for Rogers and Rogers was above it. Lee & Rogers embraced and it seemed like all was right in WSU again.

However, Lee still had a match with Latasha scheduled. Lee & Latasha went at it, but it didn’t take long for the Cosmo Club, Brittney Savage, Rick Cataldo & Jana to come out. It looked like the Cosmo Club was about to take out Lee & Rogers. However, it was all part of Savage’s master plan. The Cosmo Club attacked Latasha, giving Latasha a DQ win, a win she did not want in that style.  Savage then announced that the new Cosmo Club consisted of herself, Cataldo, Lee, Rogers & Jana. Savage told Jana that she had to make up with Cindy and attack her former ex-Soul Sister partner, Latasha.

Despite being through a blood feud and going to hell and back, Jana could not attack Latasha. Jana pulled in Cindy Rogers and laid her out. When the rest of the Cosmo Club tried to attack the suddenly changed of heart Jana, Latasha bounced up and the Soul Sisters cleared the ring.  In an exciting twist of events, Rogers was now teaming with her best friend Amy Lee & WSU’s first ever tag team, The Soul Sisters, Jana & Latasha, were re-united!

The bad blood between The Soul Sisters & The Cosmo Club is something that has not truly been put to the test yet.

Before heading to 3/5, WSU held its second iPPV, “The Final Chapter” on 1/22. Scheduled on that show, as a preview for this explosive triple threat tag team match, was Lee vs Latasha vs Tina San Antonio & Rogers vs Jana vs Marti Belle in two separate triple threat matches. In the first match, Amy Lee splashed Tina San Antonio for the win. In the second match, Jana defeated Marti Belle with a janavice submission. The Saints lost both matches, one match to the Cosmo Club & one match to the Soul Sisters. The Saints, who have been undefeated in tag team action since winning the championships, did not fare well in singles matches.

The Saints, realizing they lost momentum, decided to up the ante and bring the fight to the challengers first. The Saints said they did not want to have a normal triple threat match on 3/5 on iPPV, but they wanted to have an anything goes UNCENSORED RULES match. Both The Soul Sisters & The Cosmo Club accepted, so for the first time in WSU history, we will have a triple threat tag team title match, held under the rules WSU made famous – UNCENSORED RULES.

Have the Saints bit off more than they can chew? The Saints give up experience to both teams. Amy Lee is already being called the X-Factor in this match, as Lee has been unstoppable in WSU as of late. Ever since losing to Jessicka Havok, Lee has been angrier and more pissed off than ever before. Lee will have the opportunity to make 4 lives miserable on 3/5.

For the Belle Saints, winning this match would be the biggest match in their careers.

The stakes are high with the ultimate prize at the end of this match being the WSU Tag Team Titles. On March 5th, at the WSU Four Year Anniversary Show, live on iPPV, we will see what tag team is truly the elite.