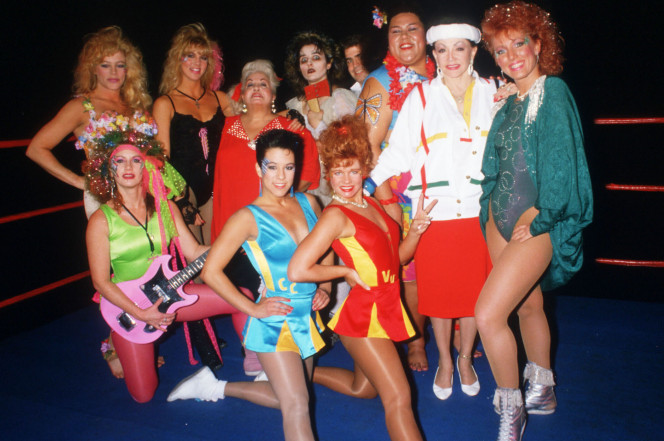 During a 1985 audition inside a sweaty Los Angeles gym, a 21-year-old phlebotomist named Jeanne Basone volunteered to charge head first into the turnbuckle of a wrestling ring and land upside down. Despite having no wrestling experience, she nailed the difficult maneuver, impressing everyone in the room. “I just went for it,” recalls Basone, who was eager to break into show business. For her moxie, she was rewarded with a role on a new syndicated television show called “GLOW.”

Bashing your head into a turnbuckle might sound like a bizarre way to get noticed by the entertainment industry, but nothing about “GLOW” — short for the Gorgeous Ladies of Wrestling — was conventional.

Premiering in 1986, “GLOW” was an all-female wrestling program at a time when women were mere sideshows in the sport. The women were assigned flamboyant alter egos that embraced the more-is-more ethos of the 1980s.

Basone became a wild-child rocker chick named Hollywood, while Lori Palmer morphed into Colonel Ninotchka, a tall Soviet broad who adopted a Russian accent and sneered at “weak Americans.” The star of the show wasn’t a sexy bombshell but a 350-pound Samoan-American elite shot putter, Emily Dole, whose nom de suplex was Mount Fiji. Each was less politically correct than the next.

Naturally, it was a hit.

“It was holding up a warped mirror to reality,” says Steve Blance, a writer for the show who also played the referee. “It talked about pop culture, political stuff.”

Between bouts, the group of women — most of whom were actress wannabes, athletes and stunt women plucked from obscurity — performed campy comedic skits skewering pop culture and American mores. If “WWF” and “Laugh In” had a love child and dressed it in spandex, you’d get “GLOW.”

This week, Netflix is dusting off “GLOW” and traveling back to the 1980s with a dramedy of the same name, starring Alison Brie as a Russian “heel” (wrestling parlance for a villain). The show premieres Friday. Certainly, this fictionalized version has more than enough salacious real-life fodder to draw upon.