Home / WWE / WWE stars who came from the “audience”!

WWE stars who came from the “audience”! 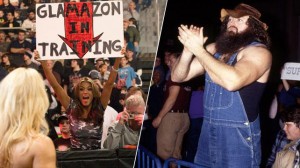 WWE fans should never jump over the barricade and interfere with the action inside the squared circle. However, there have been times throughout WWE history when a Superstar made their debut appearing as fans. There was always a motive behind their actions and many went on to become successful WWE Superstars.

WWE Classics looks at 10 Superstars who came from the audience and the impact their actions had on the WWE Universe.

Question:  What was your favorite audience debut?