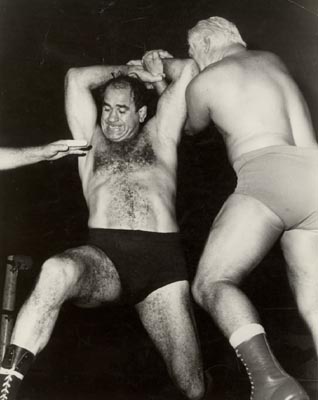 Come and step into the pro wrestling time machine, where I will write about each generation of wrestling. And we begin in the early years of pro wrestling.

In the early years, promoters ran their respective territories, as specific federations were not popular at the time. Until July 14, 1948, of course, when promoters from St. Louis, Kansas City, Minneapolis, Omaha, Des Moines and Columbus fused to form the National Wrestling Alliance. Amongst competition were the World Wrestling Association led by the LeBells, and other territories run by promoters like Jess McMahon, Jules Strongbow and Jim Crockett. But none could top the success of the NWA.

The Nation Wrestling Alliance’s center piece was Lou Thesz – arguably the greatest wrestler of all time. He was trained by some of the greatest of their time, like Ed “Strangler” Lewis and George Tragos. Thesz was handed the NWA Championship when their first champion in Orville Brown was injured in a car accident. However, they made up a false history that stretched all the way back to George Hackenshmidt winning the belt in 1904.

Lou Thesz carried the NWA for eight years, the reigning champion from 1949-1957 for all but a little over a half a year. Around Thesz’s era were other legends like Gorgeous George, Gene Kininsky, Buddy Rogers and Fred Blassie. Though in Thesz’s prime, Blassie was no more than a low-carder known as “Sailor” Fred Blassie, they shared epic battles in the future when Blassie went big.

In this day, African American stars got few chances to rise to stardom, but the ones that did were considered heroes. One of the greatest black athletes of all time was Bobo Brazil, who has a spot in World Wrestling Entertainment’s hall of fame. Another was Bearcat Wright, who you most likely will not see in anyone’s hall of fame for one reason or another.

Due to the fact that wrestling was thought to be real in those days, it did often get real. Especially when guys like Bearcat Wright came along. He got hold of the World Wrestling Association’s World Championship and the fame got to his head. Because of this, whenever he was booked to drop the title, he refused and would catch his opponent’s off guard, legitimately knocking them onto the mat. Eventually, the problem was solved by Gene LeBell – Bearcat wasn’t going to try anything slick with this Judo Champion and legit shooter. To read more about this particular incident, read Freddie Blassie’s autobiography, “Listen you Pencil Neck Geeks.” 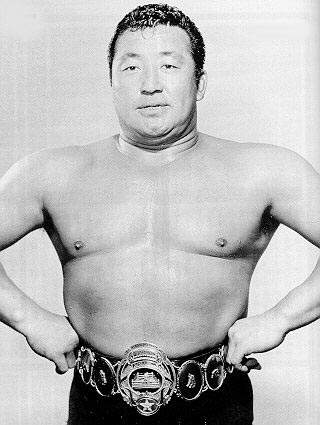 Around this exact same time, wrestling was huge in Japan. I wish I could tell you more about specific promotions in Asia, but I don’t know any by name this long ago. What I do know, is that the mega-star in Japan for years was the father of Puroresu, Rikidozan. Rikidozan is another wrestler that puts up quite an argument to be considered the greatest wrestler ever. He took on many American legends in both Japan and the United States – Namely Lou Thesz, Freddie Blassie and others. He later trained two other Japanese legends in Antonio Inoki and Giant Baba. You’ll read more about them in my next installment of the time machine.

Unfortunately for Rikidozan and the many Japanese wrestling fans of that era, Rikidozan was stabbed by who is thought to be a member of the Yakuza. Because wrestling was thought to be real back then, it was much like boxing in the sense that mobsters got hold of star wrestlers and demanded that they lose certain matches. I can only imagine that the Yakuza instructed Rikidozan to drop a match, and he refused.

Of course, Canadian wrestling must have been getting popular, for this was around the time that the legendary Stu Hart debuted. I’m not familiar with Canadian wrestling around this era, however, unless I’m asked about superstars like Gene Kininsky. If you’re itching to know, I’m sure webmaster Brad Dykens knows quite a bit about Stu Hart’s ventures as a professional wrestler in the early years.

Wrestling was also popular in Mexico at that time, as the art of Lucha Libre was born. The two most well-known superstars being El Santo and Blue Demon, not only for their wrestling abilities but their movies as well. I’m pretty sure you can find movies with El Santo and Blue Demon at a place like Blockbuster if you look hard enough, and their is a lot of wrestling in most of their movies.

Needless to say, the National Wrestling Alliance dominated the wrestling industry in the United States for years to come, and their only competition would be the later World Wide Wrestling Federation. For more on the WWWF, stay tuned for my next installment of the Time Machine.