Home / Podcasts / Tito Santana on Between the Ropes

Tito Santana on Between the Ropes 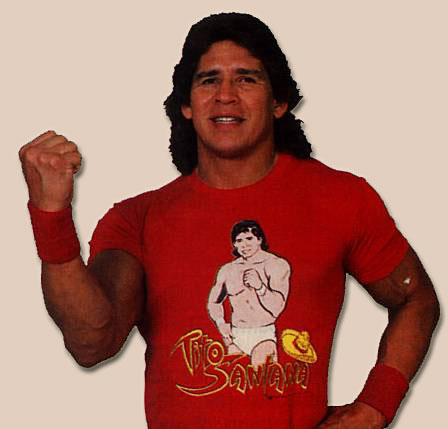 Between The Ropes
Tuesday, June 24th, 2008
ESPN Florida AM 1080 and AM 1060
Simulcast online at BetweenTheRopes.com

Former WWF Tag Team and Intercontinental Champion Tito Santana appeared as a guest on Between The Ropes this past Tuesday to promote the release of his new autobiography entitled Tito Santana’s Tales From the Ring. Santana discussed the WWF expansion during the mid-1980s, teaming with Rick Martel as Strike Force, and more.

The interview began with Santana speaking about the Strike Force tag team, which he comprised with Rick Martel during the late-1980s WWF scene. “I think I was surprised about how quick we got over. Rick Martel I had known for several years – he was a great friend of mine before we became tag team partners. And there’s some great, great memories that we spent in and out of the ring together.” Tito does admit, however, that he preferred competing as a singles wrestler at that time. “But,” he adds, “I wasn’t doing anything by myself, so when the opportunity came for me to do something with Rick Martel, I knew both of us had enough talent to make it work – I think it worked pretty good.”

Santana returned to the WWF in 1983 following a three-year hiatus from the company and was on the roster during Vince McMahon Jr.’s national expansion. “In ‘83 or early-’84, (Vince’s) father got sick and turned over the company to Vince Jr. Before we knew it, the expansion started. Every time we’d go to TV … Pat Patterson – who was a booker at the time – would say, ‘We’re going to Montreal’, ‘We’re going to L.A.’ … there was all these new markets that they were picking up, but we didn’t realize it was going to be a world thing until we had our first WrestleMania.”

Tito addressed the political atmosphere of the WWF locker room following Vince McMahon Sr.’s sale of the promotion to his son. “I guess the politics have always been involved in professional wrestling. You have your cliques; I was never really part of any clique. I was lucky, I think, to be a Mexican in professional wrestling. They needed an ethnic wrestler in there and I guess that was lucky for me. But it was very political – Hulk Hogan had his clique and if Hulk Hogan liked you … everybody knows Brutus The Barber Beefcake made a great living because he was Hulk Hogan’s friend. (Hogan) also had different guys that he brought in – Honky Tonk was one of those guys that he brought in. You had to be very, very careful, because there was a lot of stabbing in the back going on.” Although he performed as a babyface his entire career, Santana says his closest friends were primarily heels. “My best friend was Mr. Wonderful Paul Orndorff, Haku/Tonga … my competition was not the bad guys – I’d get in the ring and we’d try to have great matches with each other – it was the good guys who were coming after my job, who would love to knock me out of my position, because at the time I was in the WWF longer than anybody … everybody kind of just envied my position and everybody would have done just about anything to be in that position … But the politics are like anything else – Hulk was the main guy and if Pat Patterson, who was the booker, liked you had an advantage and if Vince McMahon liked the way you looked … if Vince McMahon thought he could make money with you, he was going to do the best he could to promote you.”

Latino fans have become a significant demographic to professional wrestling in regard to business and ratings. Santana is proud to be a pioneer for today’s Mexican grapplers and shared an experience he had with Eddy Guerrero at WrestleMania XX (the same weekend Tito was inducted into the WWE Hall of Fame). “I was walking through the dressing room with my family in Madison Square Garden and Eddy Guerrero stepped out of the ring. I believe he was the World Champion – he was one of the main guys at the time. And he just came up and gave me a hug. He said, ‘I want to thank you, because you opened a lot of doors for all the Latino wrestlers.’ I really had never thought of myself as being one who opened doors for them. I always took a lot of pride in being a good role model and I was never involved with drugs. Everything about me has always been positive. For him to come out and say that really meant a lot to me and (Guerrero’s passing) was really devastating to me.”

Santana shared a behind-the-scenes story regarding the breakup of Strike Force, where he pitched the idea of turning heel to Vince McMahon. “Vince told me (upon Rick Martel’s return) that we were going to be doing an angle and working against each other … when he came back, that’s when they created The Model. I asked Vince if I could be the one to be the heel and Vince said, ‘No, you’re going to be the babyface … there are still too many things we can do with you as a babyface.’ They already had all these plans; I found out later that Pat Patterson had been working with Rick Martel and created The Model. And I’m sure Rick had been practicing. I was just amazed at what a great job he did as The Model.”

The discussion closed with Tito pointing out one of Vince McMahon’s false promises to him. “He promised me that I was going to have a great run and he was going to push El Matador. He spent a lot of money – the vignettes, sent me to Tijuana, Mexico to learn how to be a matador fighter, rented the whole arena and the trainers for a period of time … I figured, ‘It’s Vince’s creation, he’s going to push it and make sure that it works’ and I was really excited because I was going to get one more run.” Santana later discovered that there were very little merchandising ideas planned for the El Matador character, which he perceived as a major sign that the company was not interested in pushing him.

Tito said he had little interest in signing with WCW following his WWF tenure. “I really had no desire to go anywhere else. I had made up my mind that I was going to get out. Today, people know that I was one of the few wrestlers that saved my money and I had made some investments. I was just going to get out of wrestling totally. My kids meant a lot to me and I knew that I had to be home to raise my kids. I have no regrets whatsoever, because I had three great kids … Could I have made a lot more money if I had stuck with it? Maybe, but … I wouldn’t give up what I have for all the money in the world.”

To hear this interview in its entirety – including Santana’s thoughts on why he was never WWF World Champion, his reasons for eventually leaving the company, and more – visit the show online at http://www.BetweenTheRopes.com, where you can also become a site member and access hundreds of previous BTR broadcasts and interviews. Join Brian Fritz, Vito DeNucci, and Dickerman for Between The Ropes every Tuesday night from 6:00-8:00 PM ET on ESPN Florida AM 1080 and AM 1060 or worldwide on BetweenTheRopes.com.