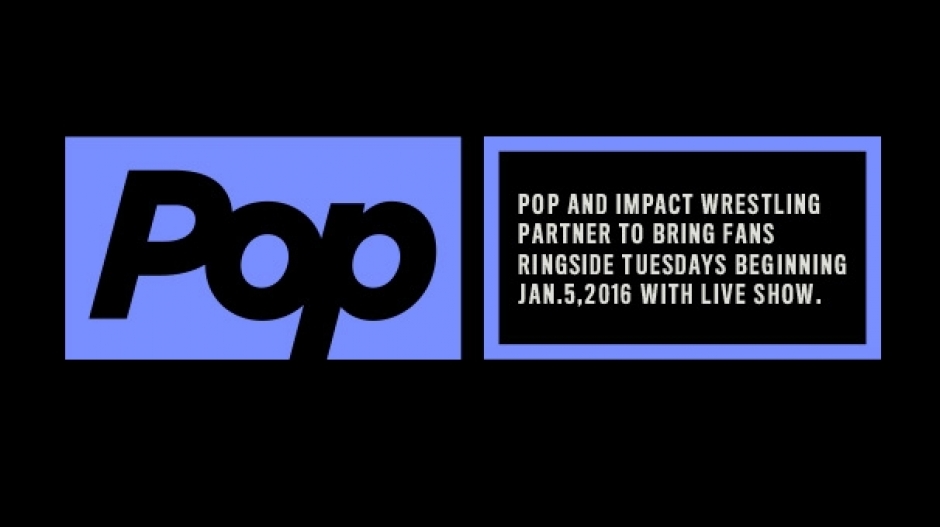 Get ready for #ImpactOnPop. Pop, a network that celebrates the excitement of being a fan, will soon become the exclusive U.S. television home of IMPACT WRESTLING, the hard-hitting, high-flying global sports sensation enjoyed by millions of fans around the world.

Pop will premiere IMPACT WRESTLING with a live two-hour, action-packed broadcast on Tuesday, Jan. 5, 2016, and the show will continue to air every Tuesday night at 9:00 PM, ET/PT. The show features some of the biggest stars in professional wrestling, including Jeff and Matt Hardy, EC3, Kurt Angle, Bobby Lashley, The Wolves, Eric Young, Tigre Uno and Gail Kim.

“Wrestling has been a fan-fueled staple since the ‘50s, and continues to be some of the most-watched appointment television today. The die-hard fandom and extraordinary passion surrounding IMPACT WRESTLING captures the spirit of Pop as a network that celebrates fan-driven entertainment and excitement,” said Brad Schwartz, President of Pop. “We’re committed to this new partnership and psyched to bring the show’s loyal fans a dedicated night to watch their favorite show on Pop every week.”

IMPACT WRESTLING is a strong global brand seen on networks in more than 120 countries around the world and broadcast in 17 languages. Its fans are some of the most devoted and socially active in sports, with more than 15 million aggregated social media followers and nearly 700 million video views on YouTube, making it the seventh-most-viewed sports channel, ahead of MLB®, NHL®, MLS® and FIFATV®.

“Pop’s enthusiasm for our partnership and the network’s fan focus is a perfect fit for our company,” said TNA President Dixie Carter. “Wresting has always been at the forefront of pop culture with the most passionate, loyal fan base. We’re thrilled to be in business with Pop and to bring IMPACT WRESTLING to more than 80 million homes.”

To find IMPACT WRESTLING on Pop, go to http://poptv.com.