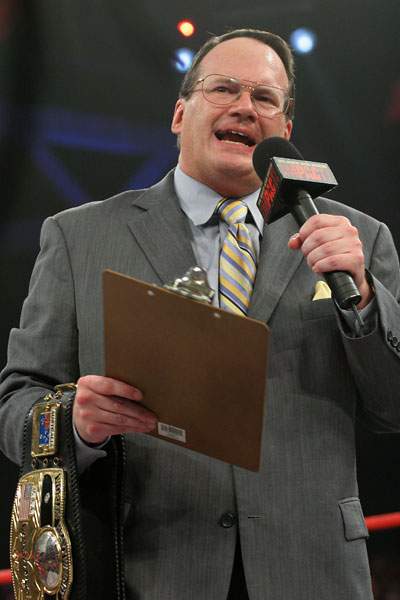 Courtesy of the Wrestling Globe Newsletter

In an explosive story, Jim Cornette today wrote on his website www.jimcornette.com and verbalized at whosslammingwho that TNA Wrestling has notified Federal and State law enforcement in Kentucky, where he resides, that Cornette intends to inflict harm upon TNA creative writer Vince Russo.

This is a legit story, and not a wrestling angle, as apparently Russo is worried for his life.

Cornette, who worked for TNA from 2006-2009, recently wrote an email to TNA talent chief Terry Taylor, expressing his disdain for Russo saying he wanted to clear the air, and that should Taylor ever hear Cornette giving interviews against the company, that it wasn’t personal and he means no ill will to anyone there aside from Russo.

In part, Cornette wrote: “I will say it because I am trying to quell the burning in my heart–I hate Vince Russo. I despise Vince Russo. I want Vince Russo to die. If I could figure out a way to murder him without going to prison, I would consider it the greatest accomplishment of my life.

“I hate him for the money he’s cost me. I hate him for what he’s done to the business. I hate him for keeping TNA from being competitive to WWE.
I hate him for the careers, even the lives he’s ruined with his shitty booking and the irreparable damage he’s done to every promotion he’s been involved with. I regularly wake up from dreams in which I am in the act of murdering him. I literally burn whenever I think of him. I have sworn to myself that I will willingly go to jail if I ever see him in person again, and he had better pray to his fictitious invisible man in the sky that that day never comes. I intend to make it my life’s work and mission to fuck with him and anything he ever has anything to do with in the wrestling business.”

“Why am I writing you this? One, I got the irresistable urge to explain to you the depth of my abhorrence for this abominable prick, and two, I want to make sure that you, and anyone you care to share this with, knows that I truly and genuinely wanted TNA to succeed and liked working with all of you.  I am no longer a supporter of TNA as a company, I hope it goes under quickly and painfully because of the stupidity Dixie has exhibited in employing Russo and now the WCW murderers, and I apparently will see my wishes come true with the new direction, but I really did want to see it succeed. I still like everyone there, and am only mad at a few people–Jeff, for talking me into co-existing with that miserable waste of human flesh for 3 years to the point where I have trouble looking at myself in the mirror and not a day goes by that I am not ashamed of myself for abandoning every principle I ever had and speaking to the motherfucker; and Dixie, not just for employing that useless twat, but for lying to me about the reasons for my firing (never mentioning Ed Ferrara’s name and acting like Russo had no part in it), and lying ABOUT me (letting some Russo stooge spread rumors that I was fired for acting unprofessionally toward him, then not putting her name on the retraction while knowing it wasn’t true.)”

“Otherwise, I like everyone there and wish their hard work could be rewarded, and they could all make millions–but they won’t, because of a lack of competence and judgement in their leadership. I have nothing to lose–I’m done with corporate wrestling, and I will never again have to occupy the same arena or even city with Vince Fucking Russo, but I still feel bad for everyone else who has labored long and hard in vain because of what he’s done to the company’s chances. I like you–I like Tenay, and West, and Mitchell, and Sahadi, and Ryder, and the talent, and the crew, and all the rest–even Penzer! And I don’t want you or any of them to take it personally when I verbally roast TNA every chance I get–but as far as I’m concerned, Jeff should have WAY known better than to hire that asshole, and Dixie, as clueless as she may be about wrestling, should have been more careful in whom she entrusted her father’s money, and more perceptive when it came to spotting imbeciles. I don’t want any of you to be harmed or affected because of their stupid decisions, but as I said, it’s now my life’s work to fuck with anything Russo has anything to do with.”

The full unedited letter is posted at www.jimcornette.com.

In response, TNA turned the email over to it’s legal reps in California.
Guy S. Blake of Davis Shapiro Lewit & Hayes, wrote to Cornette stating on behalf of the wrestling company that they took his letter seriously and had notified law enforcement in Kentucky.

Blake wrote, “It is our view that the foregoing statements constitute “terroristic threats” under virtually every jurisdiction in the country, including under the US Code (18 USC 875) and Kentucky State Law (KRS 508.080). Generally, under both Federal and State Law, a person will be guilty of having made terroristic threats if such person willfully threatens to commit a crime which would result in death or great bodily injury to the victim and demonstrates specific intent to communicate such threat to the victim or to a third party who the perpetrator believes will convey such threat to the intended victim. Your email satisfies all of the foregoing elements and it is irrelevant whether you intended to actually carry out such threat or not. Nonetheless, we must assume the worst. Indeed, the language of the email is so specific, unequivocal and unconditional that Vince Russo (a TNA employee) has understandably experienced extreme fear for himself and his family. TNA management shares his concern, not only for Vince, but for all of it’s employees, staff members and talent (some of whom were specifically named in your email as being targets of your anger).”

Blake also warned Cornette about leaking private company information as all former contractors are bound by a confidentiality agreement when they leave the company for a certain period of time.

Wrote Blake:  “Your email contained certain statements which discussed internal TNA management decisions and the circumstances surrounding your departure from TNA. Those matters constitute Confidential information.
Accordingly, we are taking this opportunity to remind you that the Confidential Information is proprietary and is not to be revealed except as expressly permitted by TNA in writing. As a former talent of TNA, you continue to be bound by your legal obligations and duties to maintain the confidentiality of such Confidential Information in accordance with the terms of your various talent agreements. You cannot share Confidential Information with ANYONE (including current or former TNA
talent) and TNA will vigorously enforce it’s rights in this regard.”

Cornette said that the worst thing that has come out of this situation is the break down of his 30-year friendship to Terry Taylor.