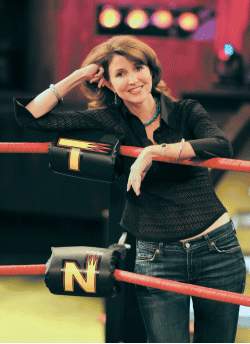 Ross Forman welcomed everyone to the TNA teleconference to discuss TNA iMPACTâ€™s first regular two hour show on Spike tomorrow, Oct. 4, from 9 – 11 pm, and the Bound for Glory PPV coming up on Oct. 14.

TNA President Dixie Carter stated that TNAâ€™s long standing drug policy prohibits use of all illegal or unprescribed drugs, including steroids.Â  Their policy includes helping with education and rehabilitation when necessary.Â  Their policy is always open to review and they will adjust their policies as more is learned about drug problems and treatment.
Having a competing show on Monday nights is their ultimate goal, but at present they are staying on Thursday nights with their new two hour time slot.
TNA is looking at multiple markets for their live shows in 2008, including New York City and Canada, and they are looking to run most of their PPVs on the road.Â  They are happy with Universal Studios, but they are excited about the possibilities of growing and working in new markets.
In the past they had to go out to look for networks for their tv show, but this time they had interest from several networks besides Spike.Â  She declined to name any others, except for Fox.Â  Spike offered them the best deal, and during their 4 year contract they will be looking at possible specials and other exciting concepts.
She confirmed that they are still negotiating with some major free agents, but stated that tomorrowâ€™s show would demonstrate that they have not forgotten the wrestlers who â€œbrought them to the dance.â€Â  She feels strongly that fans will see the TNA originals well represented, and that no one will steal their thunder.
TNA will hold tapings on Monday and Tuesdays now, instead of just Mondays.Â  They now have the chance to do what they do best, much more in ring product.Â  With two hours, they will strike a better balance between action and character development.
Judas Mesias is expected to be unable to wrestle for another 4 to 6 weeks.Â  It is unknown at this time whether he will be able to participate in any way at Bound for Glory.
They are aware of fan criticism of their creative team, but she believes that the two hour show will resolve many of the criticisms.Â  They will have longer matches and develop more characters.Â  She is confident that the two hour format will allow them to â€œspread our wings and do what we do bestâ€ – the in ring product.
The original two hour PPV shows allowed them to feature more wrestlers and present the X Division to its best advantage, and the two hour weekly shows should allow them to do the same thing now.Â  She believes that the Kurt Angle vs Jay Lethal match at No Surrender did a lot to spotlight the X Division, and that the match was a real wrestling clinic.
–Â  Karen Belcher
www.ProWrestlingDigest.com
[email protected]
(10/03/06)