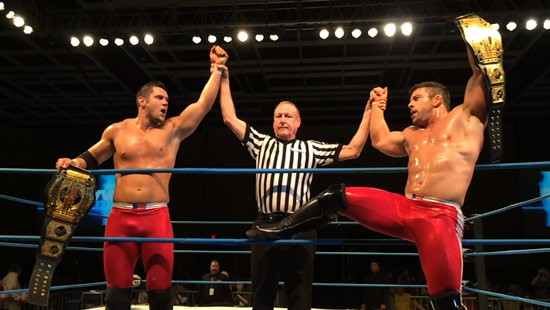 Jersey Championship Wrestling is proud to announce that Davey Richards and Eddie Edwards – the current TNA Tag Team Champions and two of the best wrestlers in the world – have been added to the already stacked tournament on November 14 in Manville, NJ!  We wanted to make this the best Jersey J-Cup Tournament ever… and now we have!

The 16-man tournament will consist of four 4-way elimination matches in the first round, followed by singles matches in the semi-finals and final rounds!

The first round matches have been set.  They are as follows:

Pinkie Sanchez  vs  Sabu  vs  Chris Dickinson  vs  Lucky tHURTeen

Frightmare  vs  Jigsaw  vs  Davey Richards  vs  Swerve Strickland

Jersey Championship Wrestling is also running a fan contest! From October 17th through November 13th, fans are invited to visit the Facebook post containing this announcement (found at http://bit.ly/2014JcupContest). JCW officials will look back at the comments on this post after the event, and any fans who guess the entire bracket correctly will get a free download code for the on-demand video of the event!

Come see JCW Live!
Tickets for all upcoming Jersey Championship Wrestling events can be purchased through the JCW website at JerseyChampionshipWrestling.com or by calling the ticket hotline at (201) 257-8621.  VIP packages and local ticket outlets may be available as well – check the website and posters for details!  All cards subject to change.