By OWW Contributor on October 2, 2014@owwcom 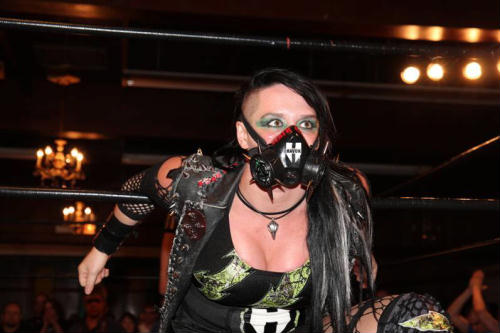 Last night on IMPACT, HAVOK anointed herself the most dominate Knockout in TNA and did so in controversial fashion.  The Knockouts Championship match was suppose to take place early in the evening, but HAVOK decided to take matters into her own hands and attacked Gail Kim before their match was officially underway.

If you go back and watch, the bell never rang when HAVOK blindsided Gail during her entrance last night. If you think about it, HAVOK picked a pretty brilliant place to gain an advantage over Gail Kim.  Then the brutality in which HAVOK took out Gail all but assured us Gail would not be able to compete last night.

Point in fact, we later learned Gail’s shoulder was separated by the attack from HAVOK. Against the trainers advice, Gail insisted upon competing. A separated shoulder is nothing to mess with, most athletes take 12 weeks to recover from such an injury.  That is 12 weeks off and extensive rehabilitation. Gail could have done more damage by competing, but that is the heart and desire of the now former Knockouts Champion.

When asked if she has any remorse for her actions last night on IMPACT, HAVOK laughed and said, “No! I show no remorse for what I have done to Gail.  She has been my target of destruction since I got to TNA. I broke her down and ripped her apart just like I said I would do.  I took away what every Knockout wants, the title.”

While the timetable for Gail’s return is in question, it is now HAVOK’s time in TNA and it appears that no one in TNA can stop her.  Whether you agree with HAVOK’s strategy doesn’t really matter, she is the Knockouts Champion and the future looks dark for every other Knockout in TNA.

We hope to have an update later this week on Gail Kim’s health status as well as the update on who might be the first to challenge HAVOK for the Knockouts Championship.