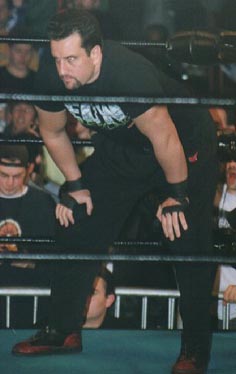 Tommy Dreamer Says “There Is An Invitation Out There” To Paul Heyman For This Sunday Night’s HardCORE Justice PPV, Discusses The Reaction From Hulk Hogan & Eric Bischoff At The Revival Of ECW (And Getting “The Rub From “The Hulkster” On Last Thursday’s IMPACT), The Reaction By Critics (Who Feel That ECW Is Once Again Being Prostituted & Bastardized), Those In The WWE, & Several Former ECW Stars (Who Chose Not To Participate), How Long He Has Been Planning This Pay-Per-View Concept, The Importance Of Authenticity For This Show, Just How Close We Were To Seeing the PPV At The Former ECW Arena Or The Hammerstein Ballroom, What The Fans Can Expect From Him In TNA After His “Final Showdown” With Raven, & The Legacy Of ECW

Former two-time ECW World Heavyweight Champion, Tommy Dreamer, was one of the special guests on this week’s edition (08/02/10) of the award-winning Monday Night Mayhem (presented by Good Health Natural Foods). You can feel The Mayhem live every Monday night (at 7PM ET/6PM CT), exclusively on The Monday Night Mayhem Radio Network (www.MondayNightMayhem.com)

How supportive has Hulk Hogan & Eric Bischoff been about the ECW revival in TNA/the concept of the Hardcore Justice Pay-Per-View & the Hardcore Originals getting “the rub” from “The Hulkster” in the ring on last Thursday night’s iMPACT: “I was at WrestleMania with my dad. I was at WrestleMania II. For anyone to say anything about Hulk Hogan, he walks slowly and has a bit of a limp from all the surgeries. He has given so much to this business. To be in the ring with him, and the fan in me & the kid in me, they kept showing me & D-Von, and we were flexing, almost doing the Hulk Hogan pose as Hulk was coming to the ring. In regards to Dixie Carter giving us her 100% blessing, I don’t really know the guys’ personal feelings towards it, but I don’t think if Hulk Hogan didn’t like what he saw, I don’t think he would be out there. He has that stroke to say ‘No, I don’t wanna do something.’ I don’t know Eric Bischoff’s personal feelings towards it. Obviously, they are going forward and giving whatever Pay-Per-View matches they were gonna do for Hard Justice; they are gonna do the following Thursday, which is great.”
The Paul Heyman/TNA rumors & the “invitation” being extended to Paul for this Sunday night’s Pay-Per-View: “I have spoken to Paul, and there is an invitation out there. I would love for him to be there, but I understand if he’s not. He’s also doing stuff for Brock Lesnar. Paul is Paul, and if he does come in, I think he could definitely help. If he doesn’t, the business moves on without him. He’s very, very talented, and I think it would be cool to get people to drink his Kool-Aid again. If he does come to terms, I think it would be a good deal for Paul, and hopefully it would be a good deal for TNA as well.”

His thoughts on the refusal of several former ECW stars (such as “The Franchise” Shane Douglas, Mikey Whipwreck, & Lance Storm) choosing not to appear at HardCORE Justice: “Number one, there are only so many matches that you can truly have. I also don’t wanna throw a bunch of people into Battle Royals just for the sake of throwing people into the show. Yes, I did reach out to Lance Storm, and he said ‘Thanks for thinking of me, but I had my closure in 2005, and it was the perfect scenario for me.’ He had some personal issues with TNA, but that didn’t affect our friendship. Mikey Whipwreck has some serious health issues, and talking to Mikey he said ‘Hey, when I sneeze, my fingers go numb, and I gotta get my neck worked on.’ He also did not want to go out there and embarrass himself, and to me, if you can’t go out to that ring, you shouldn’t go out there anymore. If you’re there, you’re there. If you’re not there, I respect that.”

His reaction to the critics who think this PPV is being done to only make money for TNA & those that feel that the ECW legacy is being bastardized/prostituted yet again and the response he has received from World Wrestling Entertainment (including his long-time friends & colleagues who still work there): “I’ve gotten so many texts & phone calls from people who do work in the WWE congratulating me and wishing me tons of success. This was never about bashing the WWE, or we’re better…that’s not the case. My plan was to create a buzz for TNA. I’ve done that, and created some ratings for TNA, and we’ve done that too. After this, my goal is to help all that in TNA. I do have a different perspective, not saying that it’s 100% right, but these are ways I could prove to other people that if this is a success, that we are on the right track here. Bastardizing it and all that stuff, no. Bottom line, this is a television show. If you don’t like it, you don’t have to watch it. Everything I have tried to do in my short time I’ve been in TNA, and trust me when I tell you: this is for TNA & for the future of this business. I wish I could have Joey Styles call the Pay-Per-View, but I can’t, because he’s under contract. If Chris Jericho was available, I would have Chris Jericho vs. Rey Mysterio, but I can’t. The surprises I have in store I hope are good surprises for people, and I look at this as a celebration of guys who are getting another shot, and you’ll never see us together again.”

What can the fans can expect from him in TNA (both inside the squared circle and/or behind the scenes) after his “Final Showdown” with Raven at HardCORE Justice: “My goal is to contribute to TNA in any role given to me and to continue to contribute in the wrestling business that I love so much. I have a list of men & women that I have seen on the indies that are television ready, and I have a list of people that should go to a developmental system that I’ve seen them work live, and if I have the opportunity to introduce these new people to the world, I would love to do that. It’s going out there and having to wrestle AJ Styles, finding a partner and wrestling Beer Money, wrestling Samoa Joe, or helping with a promo in the background behind the scenes, or helping on creative. Giving my experiences that I learned to show what I feel to help you take it to the next level. Just continue to contribute to the TNA product, as well as contribute to the business that I love.”

More is contained in Tommy Dreamer’s highly anticipated/first-ever appearance on the award-winning Monday Night Mayhem Radio Network, including the actual origins of the HardCORE Justice Pay-Per-View concept, the importance of authenticity for this show, just how close we could have been to seeing the PPV at the former ECW Arena or The Hammerstein Ballroom, & so much more! Call your local cable or satellite provider and demand HardCORE Justice: The Final Stand! While counting down the days until Sunday night’s PPV, we strongly encourage you to check out Tommy’s official website (located at www.TheTommyDreamer.com), and follow “The Innovator of Violence” right now on his Twitter page (located at www.Twitter.com/TheTommyDreamer).