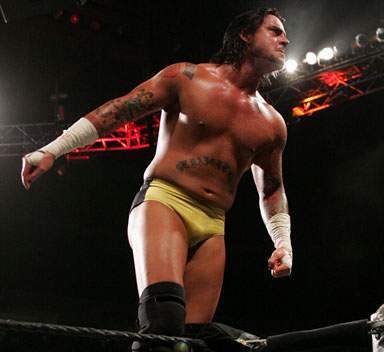 That’s what I’m talking about!

Last night was the best episode of Monday Night Raw in lord knows how many years. Everything on last night’s show was done perfectly. From CM Punk cashing in his MITB to Jamie Noble’s skit with Kane to Cryme Tyme coming out with John Cena. It was like they put everything they had into a bucket, shook it up, and came up with something totally new and different.

That is what was missing from the product for so many years, the element of surprise. That was the first time in years that I was actually sitting at the edge of my chair waiting to see what was going to happen next. I’m still shocked right now as I type this. They FINALLY gave the fans what they wanted, something DIFFERENT! It doesn’t matter if you’re a fan of CM Punk or not, if last night’s show didn’t get you excited again about the wrestling business, I don’t know what else will.

This is a moment that will go down in the history of wrestling as one of those “great moments in wrestling history.” Much like I remember when I was a kid sitting in my Aunt’s house watching Paul Orndorff turn on Hulk Hogan in the tag match against King Kong Bundy and Big John Studd, I’ll remember where I was when I saw CM Punk cash in his MITB and win the world title.

This is the first time in ages I was actually excited about writing a column about wrestling. The entire show last night was unreal. It was like an old “Attitude era” show. The element of shock and surprised returned to the product for the first time in lord knows how many years.

I’m actually excited about tuning in next week and seeing what takes place next. BINGO! I think everyone else will, too. When word gets out that WWE finally switched things up and went with someone new, fans will tune in to see what they will do next. I will be very interested in seeing what next week’s rating for Raw is.

Now onto the moment.

It was perfect. When Batista came up to the top of the ramp and Punk’s music hit, it couldn’t have been booked any better. To the way he was walking to the ring with the referee, to him rushing the referee to start the match, to his facials after winning the title; it was perfect. What a moment.

I thought things were too good to be true and seriously thought they were going to stick it to the fans and put JBL over for the title in the last match. I was wrong. It couldn’t have been booked any better. Major props goes out to who ever came up with that idea. It was amazing.

I’d bet the ranch that it was Vince McMahon’s idea.

He has been giving away a million dollars a week of his own money for the last three weeks and the ratings haven’t gone up yet. He probably finally threw his hands up in the air and said “F!&K this, I’m going to just totally create new stars because my product is so boring right now.”

There is such a buzz going on today in the wrestling business, Vince should go all out and put Mr. Kennedy over on Triple H at the Smackdown tapings tonight for the title. Could you imagine that? I think every jaw in the world would drop if that happened.

I’d have a celebration next week on Raw with all the babyfaces with CM Punk. I’d have Misterio, Cena, Cryme Tyme, Kofi, Batista, etc. Randy Orton comes out and interrupts and tells Punk not to get too comfortable wearing the title because it will be coming back to him soon. Orton gets in the ring and goes face to face with Punk. The babyfaces are about to attack Orton when Batista jumps Punk out of no where and beats the living sh!t out of him. The babyfaces stand there in shock as Batista gives Punk a brutal bloody beating. He then turns to them and they are just standing there in disbelieve. Ted DiBiase & Cody Rhodes run down and them two along with Orton and Batista totally destroy the babyfaces.

The wrestling business is about to get hot again. Don’t mess this up.

I also invite you to read my columns exclusively on WrestleZone.com. Myself, Kevin Kelly, Scott Hudson, Disco Inferno, and more write weekly columns.

Also be sure to check out FanSlamWrestling.com next Monday, July 7th for an announcement of a new project I’m working on.