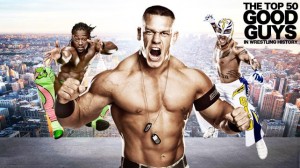 Some folks might try to tell you it’s the villains that make sports-entertainment fun. And why not?  It’s the baddies in the black hats who get to throw fireballs, electrocute millionaires and run people over with monster trucks. But it’s the good guys who give the fans something to believe in, a hero to look up to and a reminder that, more often than not, good does triumph over evil.

In compiling our list of the 50 greatest good guys in sports-entertainment history, WWE Classics extended our gaze beyond WWE history, paying specific attention to local heroes who made an impact in smaller territories across the country in the days before television. Popularity was important, but so was character — there was a special place on this list for those who never strayed far from the path of righteousness. More than anything, though, we were just looking for heroes, those inspiring competitors worthy of being enshrined on a tattered poster on a kid’s bedroom wall.

Here, we present the 50 Superstars that wrestling fans grew up admiring — and still do today.