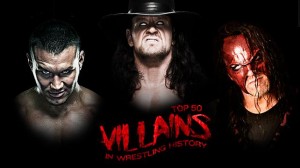 Michael “P.S.” Hayes tells the story like this — in the thick of The Fabulous Freebirds’ heated rivalry with The Junkyard Dog in Mid-South Wrestling, the fans in Louisiana became so wrapped up in the dispute that the police once apprehended a man in the audience with a Saturday night special in his hand. In the chamber of the gun was a bullet with the word “Freebirds” engraved on it.

Things have changed since the all-or-nothing days of Southern wrestling, but the intent of a good ring villain remains. If the people buying tickets don’t want to see the bad guy get what’s coming to him, then the bad guy isn’t doing their job. It’s a dangerous occupation for the competitors and managers who have been insulted, stabbed and, on more than one occasion, shot at by the fans. But the wicked Superstars and Divas on this list wouldn’t have had it any other way.

Check out the story here: http://www.wwe.com/classics/classic-lists/top-50-wrestling-villains

QUESTION:  Who did WWE forget to mention?