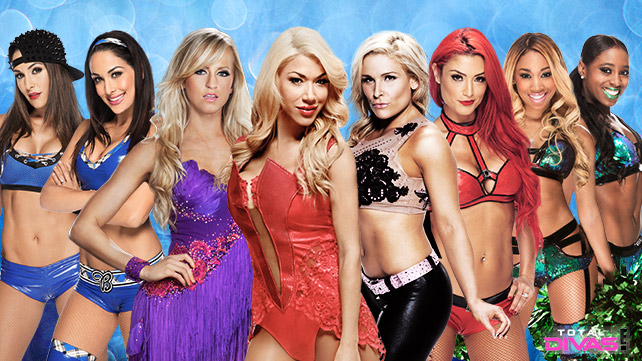 Cameras will once again shadow Nikki and Brie Bella, Natalya, Naomi, Cameron and rookies Eva Marie and Summer Rae, giving viewers insight into how these women, who are on the road for 52 weeks a year, balance their personal lives while fighting for the spotlight. In addition, WWE Diva Rosa Mendes joins the cast, as the fiery Latina who has been around WWE for years has finally found herself in the limelight. Season two of “Total Divas” is currently airing all-new episodes every Sunday at 9 p.m. ET/8 p.m. CT.

One of E!’s most popular series, “Total Divas” currently averages 798,000 viewers in the 18-49 demo, with a total of 1.3 million viewers on average. Additionally, the series ranks as a cable top-five destination in its timeslot, Sundays 9-10 p.m., in the viewers 18-34 and women 18-34 demos. “Total Divas” is E!’s second-strongest original series of 2014 to date, following “Keeping Up with the Kardashians.”

In season two, the drama has been taken to new levels as the Divas’ popularity has grown. Nikki’s relationship with her boyfriend, WWE Superstar John Cena, has been under a media microscope and their contradicting thoughts on marriage and starting a family have placed the couple in a deadlock.

For Naomi, this season has been a roller coaster, as she married the love of her life, WWE Superstar Jimmy Uso, struggled with the idea of motherhood, and dropped her very first single, “Dance All Night.” In the remainder of the season, viewers will see Naomi face a career-threatening injury when she takes a blow from a fellow Diva during a televised match.

Similar to Naomi, fun-loving Natalya has faced several challenges in season two as she continues to find common ground in her first year of marriage to her husband Tyson Kidd, especially when it comes to money, in-laws and their lackluster romantic lives. Natalya has also struggled with newbie Summer Rae, who has become a key player in WWE, taking screen time away from the veteran Divas.