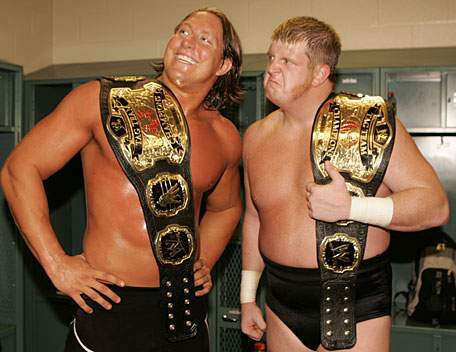 In an exclusive interview with SLAM! Wrestling, Trevor Murdoch talks about the death of his partner and best friend, Lance Cade.

Murdoch wants everybody to share in some of his positive memories of Cade, rather than the people he dislikes for merely using the 29-year-old Cade as a political pawn during Linda McMahon’s Senate run.
“To be honest, there’s been a lot of other web pages that have called me, and I haven’t done anything with them. So whatever we do, I’d like you to put it out there to EVERYBODY,” Murdoch told SLAM! Wrestling Producer Greg Oliver. “I want everybody to read this. I want this to be what everybody reads and goes, ‘Holy shit, I didn’t know this about that situation. I didn’t know that about Lance.’

“I’m not going to talk to anybody else.”

Murdoch’s wife, Amanda, called Cade “The Other Woman” since they spent so much time together, and would call each other on days off as well, eager to discuss ideas they had for their characters.

Initially, Cade (Lance McNaught) was asked to choose between Murdoch (William Mueller), fresh from Harley Race’s wrestling school, and Kevin Thorn (Kevin Fertig), who he had known in the WWE’s developmental system.

Murdoch’s unique look (“country by nature”) appealed to Cade, and they clicked, sharing a deep passion for the business.
“WWE thought they were putting two guys together so they could make a million dollars. What they didn’t know is they were putting two guys together that became best friends. And it breaks my heart every day,” Murdoch choked out, breaking down in tears, “it’s hard to talk about it now, man.”

The call came to Murdoch on August 13, 2010. He was asleep, and was woken by his wife and bar manager, Darin Waid, with the news. In disbelief, he checked his phone and there was a text message from Shawn Michaels — who trained Cade — asking him to call.

In the hour and a half interview, Murdoch addresses far more than their partnership. He talks about his visits with Cade’s family, how his own kids — who called him Uncle Lance — are dealing with his passing, and what the funeral was like.
Murdoch doesn’t shy away from the bigger questions, either.

“My partner’s been gone three and a half weeks now, and you’re really the first person I’ve spoken to just for the simple fact that I don’t want anybody thinking that I’m trying to capitalize on my best friend’s tragedy, and my best friend not being here,” Murdoch said. “Because I would trade anything in this world besides my wife and children to bring that man back here, and for him to be here with his kids. It is a tragedy and it is something where personally I’m struggling with Jesus right now, because I really don’t understand what the point is, taking a good man like that.”
The lengthy story is available in its entirety exclusively at SLAM! Wrestling.