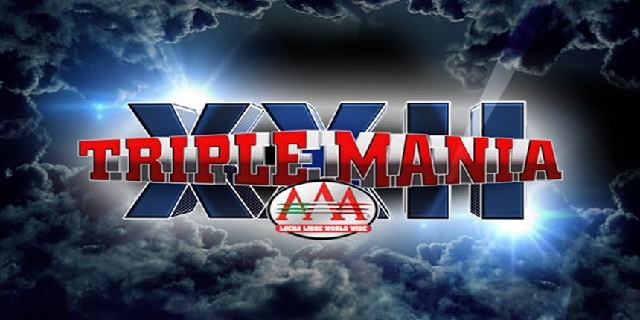 4. Steel Cage Match where the loser must get shaved or unmasked: El Mesias left Electroshock in the ring to get shaved and Mesias subbed for Jeff Jarrett. Order of Elimination: La Parka Jr./Averno/Blue Demon Jr./Chessman/El Mesias. This was a total bloodbath full of wild spots including Mesias jumping off the cage and Electro’s white outfit turning blood red.

5. Mascara contra Caballera: Psycho Clown defeated Hijo del Texano in another bloodbath full of table spots and unprotected chair shots to the head. There was a funny spot here where during some runins El Fantasma who is a commissioner in the DF had to kick out his own son. Texano got his head shaved in the ring afterwards.

6. 4 Way Dance por la Copa Triplemania XXII: Perro Aguayo Jr. beat Myzteziz after a foule to win the Copa. This was another match filled with blood as Doc’s bad shoulder injury got reopened and Myzteziz juiced like crazy. Cibernetico chokeslammed Wagner to eliminate him then he got eliminated by a Mistica. After the match, El Patron came out and got into a brawl with Perrito where he used his jujigatame before Perrito ducked out. The show ended with Patron as the conquering hero.

El Patron (Alberto del Rio) opened Triplemania tonight with his father Dos Caras and he gave a scathing speech about the WWE and the monster he encountered called racism but didn’t go into any other details before Konnan and his cronies came out to confront him leading to El Patron running them out of the ring.

El Brazo & Rayo de Jalisco Sr. were both inducted in the AAA Hall of Fame tonight at Triplemania which I must have missed all of those Rayo Sr. matches in AAA. Rayo Jr. was there of course to accept on behalf of his father. Perro Aguayo Jr. came out and ran down Rayo which led to a battle before Blue Demon Jr. helped Rayo run out the Perros.

The big news of the show actually came after the main event where Rey Misterio Jr. sent in a taped video talking about starting in AAA and then the feed went off so we don’t really know what all he said afterwards.

Jeff Jarrett & Ricochet both missed Triplemania tonight due to issues with their airline providers and both apologized on Twitter. Jarrett said that he never missed a show in 28 years because of travel problems.