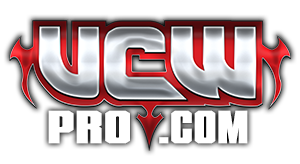 Universal Championship Wrestling makes its return to Owensboro, KY for the first time in 2014 as they present UCW FLASH POINT! The event is shaping up to be one of the most exciting wrestling events to ever hit the tri-state area. PLEASE GET YOUR TICKETS EARLY AS BOTH UCW UPRISING & UCW RECOIL SOLD OUT!! You do not want to miss this event as it features the UCW DEBUT of the founder of TNA Wrestling, USWA Wrestling Legend, multiple time world heavyweight champion, and former WWE & WCW Star “King of the Mountain” Jeff Jarrett! Also debuting at the event is former TNA Knockout Karen Jarrett, and former WWE/ECW star “The Innovator of Violence” Tommy Dreamer. Stars set to return at UCW Flash Point are former WWE/ECW/TNA star “The War Machine” Rhino, former WWE star “Ironman” Rob Conway, The Maddox Brothers, “Superb” Scott Sexton, Chad Stallings, “Sexy” Sean Casey, Sigmon and all your favorite UCW stars!!!

“Double J” Jeff Jarrett w/Karen Jarrett is set to battle former UCW Heavyweight Champion “Superb” Scott Sexton! Will the superb one be able to beat the former world champion with his queen by his side or will he end up on the receiving end of the stroke or a guitar shot? The Maddox Brothers unite once again to prove they are the best unsigned tag team in the business when they challenge two ECW Hardcore Icons Tommy Dreamer and Rhino. The tag match will be an extreme rules match, will the brothers be able to beat the ECW alum at their own game? At UCW Recoil “The Headliner” Chris Michaels came up short in a thrilling contest with “Ironman” Rob Conway, the two have signed to square off in a highly anticipated rematch on May 3rd. Will the veteran be able to avenge the UCW Recoil loss or will the former WWE Tag Team Champion be able to once again walk out victorious? Three other huge matches have been signed, all the questions will be answered live Saturday May 3rd at UCW Flash Point!

*SHARE THE EVENT & INVITE ALL FRIENDS AND FAMILY TO THIS SPECIAL ONE NIGHT ONLY WRESTLING SPECTACLE!!!!!!!!!!!!

VIP 1st, 2nd, & 3rd Row Tickets: $20
*VIP Tickets include early admission into the venue for a special meet and greet with all the stars of the show. VIP ticket holders also get assigned seats within the 1st, 2nd, or 3rd row.
General Admission Tickets (Row 4 and back): $10 in advance, $15 at the door the night of the event.
Tickets will be available at The Next Level Indoor Sports Facility in Owensboro and will also be available online at the event websitewww.ucwpro.com WHICH WILL BE UP THIS WEEK. Any questions about ticket availability call The Next Level Indoor Sports Facility or email [email protected]. PLEASE REMEMBER THAT THE LAST TWO EVENTS SOLD OUT! GET YOUR TICKETS FAST!