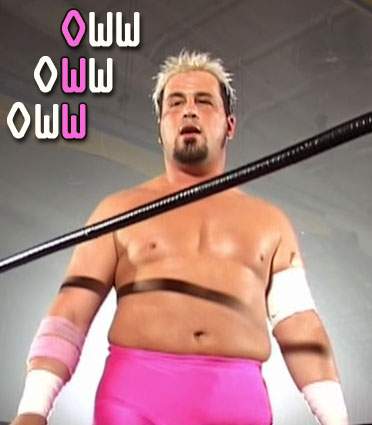 Tomorrow night, Saturday September the 8th, the Union of Independent Professional Wrestlers holds its first show in over 3 years and it’s first ever show in Toronto, Ontario.Â Â  The show, titled “BORN AGAIN” will be headlined by 4-time World Champion and ECW Original, “The King of Old School” STEVE CORINO, as he goes into battle against upstart indy sensation STERLING JAMES KEENAN.
Â

“Tha O Show” will be out in force, as Big Daddy Donnie and Dan-e-o will be in the house, laying down the play-by-play for the Hammerlock Video DVD release.

The card itself promises to be one of the more exciting shows Toronto has seen in some time.Â  The Corino-Keenan battle has been simmering for over a year, starting in Britain’s 1PW promotion where Keenan guided TNA’s monster, Abyss, to the 1PW Championship.Â  Abyss lost the title to Corino following an incident in which both Abyss and Keenan physically assaulted Corino’s 9 year old son, Colby.

Their hatred continued to grow on the American indy circuit.Â  In Cleveland’s Absolute Intense Wrestling, Corino captured the Absolute Championship which Keenan had been gunning for.Â Â  Keenan feels that Corino swept in and stole the belt that was soon to be his.Â  In Buffalo, less than two weeks ago, Keenan defeated Samoa Joe and Rikishi at BaseBrawl VII to capture the Natural Heavyweight title.Â Â  Backstage, Corino and Keenan clashed as SJK bragged about his championship win.

This battle will explode Saturday night when Steve Corino and Sterling James Keenan meet in singles action for only the second time ever.Â Â  Will this put an end to their situation or is it just the beginning of an all-out war?

EL GENERICO, the brash young luchador who’s taken promotions like Ring Of Honor, Pro Wrestling Guerilla and the International Wrestling Syndicate by storm, is coming to the Union.Â  He will face off against the growing ego of “Fabulous” JOHN McCHESNEY.Â  McChesney is the current IWC Super Indy champion, a title he has now held four times, and wants fans to remember that he was the last champion of the original Union.Â  With the tournament to crown the NEW Union Champion coming in November, both of these men will be looking to make a big impression on Union officials in this match.

Buffalo, NY native PEPPER PARKS will be at “BORN AGAIN” to take on brash young RICKY LANDELL.Â  Parks is fast becoming a force to be reckoned with in the NWA where he is the current NWA Empire champion and recently competed in the tournament to choose a new NWA World champ.Â Â  Landell is a mover and shaker in the rival AWA where he is a former World Tag Team champion and has held several regional titles including his current reign as Zero-One Max United States champion.

Homegrown Ontario talent will also be on display at “BORN AGAIN” and will certainly be front and centre with the debut of the North Lights Cruiserweight division.Â Â  Cambridge, Ontario native EDDIE OSBOURNE will take on his heated rival, Hamilton’s own RIP IMPACT.Â  And hometown Toronto fan favourite The HORNET goes up against “The Future of Fashion”, SHIIMA XION.Â Â  Both of these matches promise to be incredibly exciting with the high-risk, fast-paced Northern Lights style on full display.

In addition there will be matches featuring ROBIN KNIGHTWING and KEVIN GRACE of the legendary ALL-KNIGHTERS stable, “The Bastard Son of 1,000 Corpses” SEBASTIAN DARK, the 6 foot 9 inch “Motor City Monster” EDDIE VENOM, “The Big Ticket” REGGIE MARLEY, “The Right Stuff” BRODIE LEE and much, much more…

Join the Union for a night of excitement this Saturday night when pro wrestling in Toronto is “BORN AGAIN”.

TICKETS are just $20 each and are available now online at www.wrestlersunion.ca or in person at Legion Hall.

Driving from the West:
Take the QEW EAST to Cawthra Rd (Exit 134). Turn right onto Cawthra Rd South to Lakeshore Rd. Turn left onto Lakeshore Rd east. Lakeshore becomes Lake Shore Blvd at 43rd St.Â  The Legion Hall is the next building on your left-hand side.