Undertaker vs. Sting at WrestleMania 32? 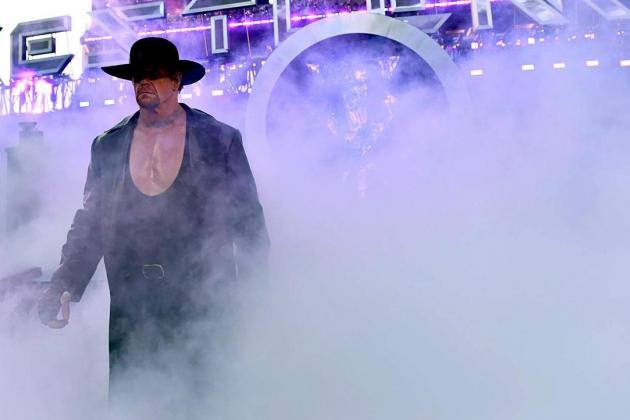 Should Undertaker vs. Sting at WrestleMania 32 come to pass, it will be built on pageantry and star power, on bells, whistles, flash and everything that makes up pro wrestling itself.

The match that once seemed like it would never happen is becoming increasingly likely. Undertaker’s home state of Texas hosts WrestleMania 32 as both men’s careers threaten to come to an end. It’s now or never for that collision of colorful characters.

It’s unclear what WWE‘s plans are, but the two legends reportedly talked over the possibility of meeting at next year’s WrestleMania.

PWInsider’s Mike Johnson reports, “Undertaker shared a locker room backstage with Sting and the two actually shared the same flight back to Texas. There was a lot of ‘if we do this’ talk between the two about a potential match.”

SEScoops shared a photo of Undertaker and Sting at the airport sans face paint and ring gear.  That image is reminiscent of Floyd Mayweather and Manny Pacquiao having their impromptu meeting at a Miami Heat game. Much like that upcoming superfight, Undertaker vs. Sting will be coming several years too late.

Next year, Undertaker will be 51; Sting will be 57. Both are far beyond their primes.