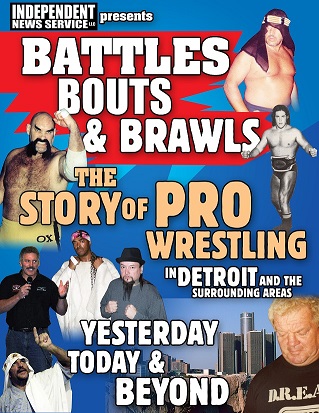 Moviegoers and fans of wrestling. You all say you want something new, “no more remakes” the fans cry. Here’s your chance to help the world of indie film makers

Spread the word and help us make something you can proudly say you were a part of.

The short film “RING OF ANGELS”, is a heart-warming tale of what it was like to grow up in the land of Pro-Wrestling

“RING OF ANGELS” was written by Carlos Espada and filmmaker Albert Xavier completely based on Espada’s memories growing up in a family of professional wrestlers. (Directed by Albert Xavier and Produced by Evan Ginzburg)

Allow Eddie Montoya (Jose Hernandez, Jr. – HBO’s Oz, Heaven and Una Calle Sin Salida) to take you on the journey of what it’s like to grow up in what some may think of an abnormal life. But for eight year old Eddie Montoya, this was the life he knew week in and week out. Coming from a family of masked wrestlers, he was in the locker room at every single venue seeing all the ins and outs of pro-wrestling, with his dad. This is a short film that embarks on a journey where everyone will take something valuable dealing with love, respect and the way to balance a better life.

Is Eddie set up to take the path of his father before him? Or will he find a much needed balanced life that seems more grounded?

Always looking for new fresh projects based on true stories, Xavier encouraged Espada to write a short film based on his upbringing. We came up with something we feel can transcend to any age and any profession. This is the first of many projects Albert and I will work on.

Albert Xavier has many years within the film industry as an independent filmmaker. Some of his film credits include his first feature award winning film, Red Passport & Hermaphrodite and award winning shorts that include Mi Abuelo, Galaxia, A Different Man and Just1Wish . Xavier is the Winner of the 2003 Lincoln Center LaCinemaFe Audience Award for Red Passport and the 2010 Best Film Award in San Juan, Puerto Rico for Hermaphrodite.

Carlos Espada was raised in a wrestling family; his father George L.Espada and uncle (Jose Espada) were both wrestlers in the 70’s and mid to late 80’s. Espada himself has ventured into the square circle for a short period of time and soon opened a wrestling federation with his father and uncle (Wrestling World Wide) The idea was to bring wrestling to inner city children. Giving back to the roots of which he came. Soon after, Espada would work within the toy industry. Working on toy lines for bands such as KISS, Iron Maiden, Eminem, Rob Zombie and other properties such as Marvel Comics, Star Wars and Star Trek. Espada: “The love of wrestling is something that has never left my heart. I knew in some way I would return to it. I am more than happy to share some of the stories of growing up in the world of Wrestling.”

Evan Ginzburg is the associate producer of The Wrestler, which features such headline movie stars as Academy Award nominee Mickey Rourke. He is a producer of the award winning documentary film Theresa Sareo: Alive Again which documents the story of Theresa Sareo who lost her leg after an impaired driver struck her on a New York City corner and features Gary Sinise and Lanny “The Genius” Poffo. Evan has been involved in the professional wrestling scene for over twenty years. He continues to publish his popular newsletter, Wrestling- Then and Now, which spans beyond wrestling and crosses over into mainstream society. He is also the host of Evan Ginzburg’s Legends Radio with his co-host Dr. Mike Lano

With the help of some good people of the toy and wrestling industry we put together some great incentives. Everything from a Silver Angel Minimate (by Diamond Select), wrestling mask autographed by the cast and even a chance to be an extra in the movie are available to those who help this film. Through the magic of Kickstarter and your help, we need to make this film a reality. Your donations will go towards camera rentals, lighting and production costs. All this would be utilized in making this script shine, reaching the hearts and minds of every living soul. The project has an amazing crew, production that will shine out, and an amazing cast of actors already committed to the project,

Once the film is finished, it will compete and screen at festivals around the world. Life is about risk, hopes and dreams. Remember, icons are made by you the fans, they are not born. Help us keep the dream alive!! Not only for the production crew of Ring of Angels but for the countless others with stars in their eyes and songs in their hearts. Through your support they will believe in hope.

See what Hollywood Insiders say in Mark Nowartarski’s latest project: Battles, Bouts and Brawls: The Story of Pro wrestling in Detroit and the surrounding area – Yesterday, Today and Beyond’ AND, go to

www.INSENT.net and Become a Part of Wrestling History TODAY.