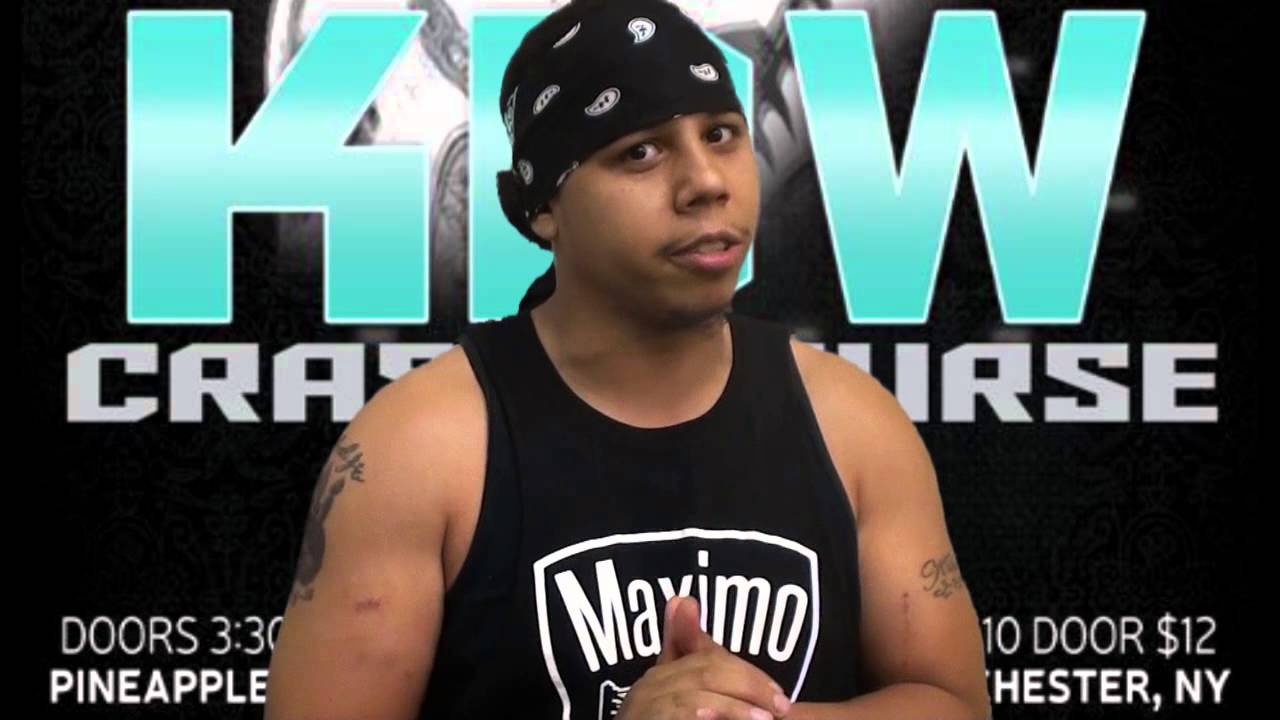 UPW kicked off 2016 with WrestleBowl at the Eagles Club in Rochester, New York Saturday, January 9th. It was highlighted by a wild Last Man Standing match and three huge title matches. Here’s a recap of all the action.

The Wet Bandits vs. The Kayfabe Kids vs. Team Wessler vs. The Homewreckers

The first showcase match of WrestleBowl 2016 featured four teams looking to make an impact with three of the teams making their UPW debuts. The Wet Bandits of Eric Rosecroft and Joe O’Connor, The Kayfabe Kids (Yamaraj and Jeremy Jensen), Team Rexler (“Dirty” Rex Atkins & Professor Wessler). The other team, The Homewreckers (Anthony Gaines & Jet Rebel) , made their debut at November 2 Dismember. A great showing by all four teams who showed a lot of heart and desire to win. But in the end, Gaines and Rebel hit Jensen with their finisher, The Hangover, for the three-count. An impressive victory by the Homewreckers as they now look to move up the tag team ranks in UPW.

Six up-and-coming stars from Canada were featured in this one as The Canadian Geese took on the “Eh” team. Sabre’s team controlled the action cutting the ring off and isolating Cassidy and Vertigo. Vertigo though would eventually tag in Banks who took it to Durst. Things then broke lloose and all six men got involved. The “Eh” team took care of Sabre and Myles, isolating Durst. They took advantage with Banks delivering an axe kick, Vertigo delivering a jumping knee, and Cassidy hitting his CassiDDT for the three-count. Cassidy, Banks, and Vertigo get the win.

The opening contest of WrestleBowl’s main show featured two of UPW’s top stars looking to keep their momentum going. Knight’s gained a big victory at November 2 Dismember defeating Space Monkey, while Hauss avenged his loss to Carter Mason at the Upstate 8 by defeating him also at November 2 Dismember. Back and forth match with both men hitting each other with their best shots. In the end, it was Hauss countering Knight’s attempted brainbuster and locking in a reverse figure-four leglock forcing Knight to tap out. A hard-fought victory for Hauss as he makes a major statement in this one.

This was the culmination of a long-standing feud between two men who have been at odds with each for almost a year. The wild, vicious veteran “Sik” Rik Matrix has run roughshod through many of UPW’s young lions. But one has made it a point to stand up to the Sik one in Bobby Dipinto. Tensions were high and both men along with all the fans, were amped for this one in which the winner would be the man whose opponent fails to make it to his feet before the referee’s 10 count. This was an all-out war with both men hitting the other with everything they had. Despite their best efforts, including a Matrix Driver and a Dipinto putting Matrix through a wooden board outside the ring and inside with a spear, both men barely got back to their feet. Dipinto, though, buried Matrix under three wooden boards and a steel chair and delivered a top rope elbow onto Matrix. Both men struggled to get back to their feet, but Dipinto barely made it back to his feet before the 10 count as Matrix flipped off his adversary before succumbing to the mat. Post-match, Matrix shook Dipinto’s hand in a somewhat surprising, but well-earned show of respect. The issue between these two may be over, but this was a battle neither man, nor the fans, will forget for a while.

The UPW Tag Team Titles were on the line as the defending champs, Coleman “The Fight” Jackson and Krist Worthless took on the team that gave them their only loss in UPW in To Infinity & Beyond. Colin Delaney & Cheech have been on a roll of late and looked to knock off Tigerslayer 08 once again, this time with the gold on the line. Unlike their first match, the champs showed great teamwork, keeping Cheech in their half of the ring. Cheech would fight back and tag in Colin, who took it to both Worthless and Coleman. All four men in with Colin and Cheech using very unique and innovative moves to keep the champs grounded. Finish saw Cheech powerbomb Coleman off the top rope onto his partner’s back with Cheech pinning Coleman for the victory. A frustrating loss for Tigerslayer 08 but To Infinity & Beyond prevail as they continue their winning ways and become the new tag team champs.

Winners & New Champions: To Infinity & Beyond

Singles match featuring the Interstate Madman taking on the veteran fan favorite. Falco used his speed and quickness in the early going. But Dewey used his size and strength to gain the advantage. Falco fought back and delivered a pop up powerbomb for the three-count. However the victory was short-lived as Falco was attacked after the match by Professor Wessler & “Dirty” Rex Atkins. The reasons for their attack are unknown, but it seems as if these three have formed some sort of alliance which doesn’t bode well for Falco or the rest of the UPW roster.

Rematch from November 2 Dismember where “All Ego” got the win with his “Spinning Dwayne” after hitting a low blow on Coconut behind the referee’s back. Page started out with the advantage, but was more preoccupied with the fans than his opponent, allowing Coconut to take control. Back and forth both men with at it with neither able to put the other one away. Page seemed to have victory in hand as he looked to hit a top rope superplex. Coconut fought him off and delivered his slingshot spear and got the victory. A hard-fought victory for the popular Jones as he looks to get back on track in UPW in 2016.

6. “Rain On Your Parade” Cloudy vs. Space Monkey

Match that saw the unorthodox and unpredictable Space Monkey taking on a man who feels he should be No Limits Champion in Cloudy. Cloudy, upset because his match with No Limits Champion Mattick at November 2 Dismember was stopped due to Mattick suffering a knee injury, looked to take out his frustrations on someone he called a “circus freak”. Space Monkey used his aerial offense to gain control in the early going. Cloudy then gained the advantage and did his best to keep Monkey grounded. Cloudy with a cloudy cutter and burning hammer for near falls. Monkey hit a top rope seated senton and a tail whip to get the victory. Space Monkey gets the win after being unsuccessful in his previous encounters in UPW.

“The Alpha & The Omega” Jason Savior vs. Anarchy Ash Aubrey vs. LaDiva vs. “The Cali Kid” Jordan Falco vs. “Mr. 450” Jay Flyier vs. Victor Lord

Six way scramble match featuring six stars looking for a signature win to start out the new year. The big men, Savior and Lord, started out with Lord getting the upper hand. Then the action spilled to the outside with Savior pressing Aubrey to the outside onto Falco, Flyier, and Lord, and LaDiva hitting a cross-body to the outside as well. Back inside, each competitor gained near falls. Finish saw Flyier go for his 450 splash but Lord caught him and delivered his “21” muscle buster for the three-count. A huge win for Lord as he looks to gain some much needed momentum.

Carter Mason vs. “The Young Lion of the West” Mattick (c)

Mason actually wanted Mattick to forfeit his championship to prevent any further damage or injury, but the champion refused and the match was on. Mattick took it to the challenger in the early going, but missed a mafia kick and hurt his right knee in the process, the same knee injured in his match against Cloudy forcing that match to be stopped. Mason focused his attack on the injured knee. Mattick fought back, but Mason used three baseball slide dropkicks in the corner that stunned the champion. Mattick barely made back it up before the referee’s 10 count. Mason went for a jumping knee strike, but the champion hit his patented Made For Living and a cutter from out of nowhere for the three-count. Mattick fights through more adversity and another top-flight challenger to retain his title.

Matchup featuring the popular youngster Torrens looking for his first singles win in UPW against a man making his UPW return after being out of action for four months due to a knee injury. As usual, Cayden didn’t endear himself to the fans in his return but he did show a viable mean streak. Outwrestled Torrens in the early going but Torrens matched him move for move as Cayden rolled outside to stop the momentum. Took control back inside. Torrens gained a few near falls, but the veteran Cayden used a right hand, spinning backfist, and discus lariat to put him away for the three-count. “Mr. Charisma Personified” makes a successful return to UPW and showed that he’ll be a force to be reckoned with in the new year.

WrestleBowl’s main event was a match 12 years in the making. Two men who have had several battles in tag team action finally went at it one-on-one with the UPW gold on the line. Technical match to start out. Maximo gained control after Hellcat chopped the ringpost on the outside. Maximo wore the challenger down, but Hellcat fought back. Both men gained several near falls on the other. Hellcat went for his springboard flatliner but the champion moved forcing Hellcat to stop so he wouldn’t run into referee Richard Head. As Maximo went for a superkick on Hellcat, he moved. Maximo ended kicking referee Richard Head, taking him out. Hellcat would eventually hit his flatliner and had the champion beat, but there was no referee to make the count. This allowed Maximo to go low on the challenger and hit his package piledriver. Maximo then pulled Richard Head over as he made the three-count. Post-match, Maximo and Hellcat shook hands but as Hellcat turned around, Maximo nailed him with the title belt. The champion went for another package piledriver, but Mattick came out to make the save. Mattick then challenged Maximo to a title match which he accepted. So the stage is set for UPW’s next show with Maximo Suave defending his UPW Championship against the #1 contender for his title and arguably his toughest test to date in the Young Lion of the West.