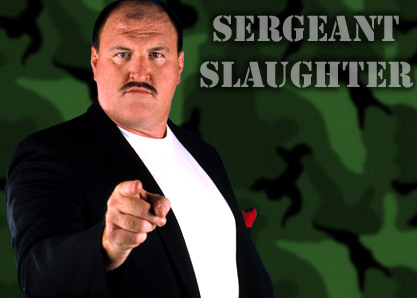 Â United Wrestling Federation president Hermie Sadler announced today that the main event at Capital Punishment will feature 2 Five Man teams, with the winning team having to force a member of the losing team to submit or become unconcscious.

What is even more interesting is the leaders of each team.Â  WWE Hall of Famer Sgt. Slaughter will lead his team against a team led by former World Champion and current WWE Smackdown color commentator JBL.

The match will consist of 2 rings, surrounded by a 15â€™ steel cage.Â  The match will start with a member of each team, with additional team members alternating depending on a coin toss that will take place before the match.Â  Once all 10 team members are in the cage, a team can win or lose.Â  Both team captains are eligible to enter the cage at any time.

Each captain is required to submit his team members to the UWF no later than August 20, and the teams will be announced August 27 on www.uwfusa.com.

Tickets are on sale at the Siegel Center Box office (804)828-RAMS and www.ticketmaster.com.