Home / Columns / Does Vader belong in the WWE Hall of Fame?

Does Vader belong in the WWE Hall of Fame? 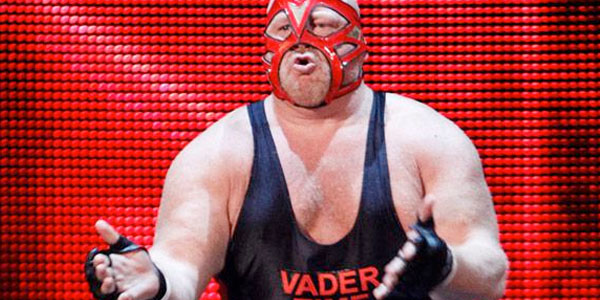 Thoughts on Brock Lesnar, Triple H and The Undertaker:

Undertaker was just phenomenal and I would say he is the best big man in professional wrestling history, without a doubt.

I think Brock Lesnar is just a beast, he’s an incredible athlete and he would be great at anything he turned his hand to, I would love to see Brock featured more than he is.

Triple H is doing a fantastic job running the company now but I would love to see more of him performing in the ring as he is still a tremendous athlete.

Whether we’ll see him entering the WWE Hall of Fame soon:

I heard rumblings about it a couple of years ago, but I’ve not heard anything for a while now. I would really like for that to happen, I think I’ve earned it. Yokozuna, Bam Bam Bigelow, King Kong Bundy and myself would be considered super-heavyweights, and I would rank myself very high out of that group, and there is a time in my career in the early nineties where I considered myself to be the best big man.

Eric was put into a situation and I think from a wrestling standpoint he wasn’t really ready for it at that time. He became very educated and excellent at what he did but it was kind of like we had one guy running the wrestling part and then two weeks later we had another guy doing it and so on and so forth until Eric did it. I think Eric was way in over his head initially but he certainly figured it out with the help of Ric Flair and Hulk Hogan and there were times when it became a biased situation but he achieved some great things, he is one of the most successful promoters in the history of professional wrestling.

What can I say about Vince, he’s a genius, he is the most successful wrestling promoter of all time and just works so hard. He was very approachable and he has done nothing but treat me like a gentleman.

You can read the full interview here: Vader Interview (http://www.wrestling101.com/home/2014/05/vader-interview/)

Related ItemsFeaturedhall of fameundertakervadervince mcmahonwwe
← Previous Story AS I SEE IT: “The Sickness” Revisited
Next Story → Who’s NXT?