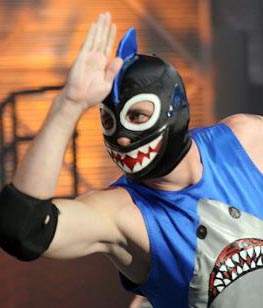 Everyone at VPW would like to thank the over 320 fans that packed in the Centereach VFW Hall on a rainy Friday night. VPW would also like to thank our special guests, WWE Hall of Fame Inductee Greg “The Hammer” Valentine and TNA Star Shark Boy.

The VPW Tag Team Championship Tournament kicked off with an exciting first round match that saw Eclipse defeat the debuting Funky Fresh Boyz. The debuting K-Fresh and K-Funk had an impressive debut, but it wasn’t enough to out due Xandar Page and Jay Delta.

The second first round match featured the returning SAT defeating Pretty Poison. The experience of Jose and Joel Maximo was too much for the young team of EJ Risk and Justin Toxic. Even their manager, Tough Tommy, couldn’t help his team win. In fact, Tough Tommy was so pout of control that VPW Management made the call to have Tommy ejected from the match.

In a match that truly could have gone either way, the Suburban SWAT Team came up short against Livewired in the third first round match up. Both teams showed each other respect before and after the match in a showing of true sportsmanship. Despite the loss, the Suburban SWAT Team of Johnny Suburban and Joey Everlast have to be considered amongst the top contenders for the tag team titles. After the match, manager Mikey Old School was seen coming up with a plan for his team.

The fourth match was a special attraction that saw the Zombie running wild against the debuting Dr. Lamar Braxton Porter. Once again, the Zombie was victorious. It seems that the only person in VPW that has been able to defeat the Zombie is the VPW Champion, Jason Static.

The fifth match was scheduled to feature Best Bodies, Inc. members Sabotage and Joe So Delicious against Nightmare and Chopsaw. When Sabotage hit the ring alone, something seemed up. Sabotage informed the fans that Joe So Delcious was at the gym and that he would be competing in the tournament alone. Something definitely seemed off about that because there is no way that anybody in Best Bodies, Inc. would pass up a chance to win championship gold. With a 2 on 1 advantage, it looked like Nightmare and Chopsaw were a sure thing, but VPW Champion Jason Static made certain that his man won the match. Contributing to Nightmare and Chopsaw’s downfall was the mysterious Gina Bella. For the first time, she officially accompanied Chopsaw to the ring, but she seemingly served more as a distraction than anything. Following the match, Static explained to the audience that he had gone back to the locker room and found his gear and his bags chewed up as if a shark had gotten to them.

Next up was a very special edition of the Jerry Fitzwater Show with special guest Greg “The Hammer” Valentine. Fitzwater seemed in awe of Hammer’s presence, but as usual, Fitzwater seemed more confused than anything. Just as the interview was picking up, members of VTG Enterprises, including Vinny the Guido, Scotty Rio and Johnny “Muscles” Marinara, hit the ring and got right in Valentine’s face. Not one to take crap from anybody, Valentine quickly laid out all 3 men and even trapped Rio in the Figure-Four Leglock. Mikey the Security Guard made sure that Fitzwater was kept safe during all of the action.

During intermission, VPW fans were given a chance to meet and take pictures with most of the roster, including Shark Boy and Greg Valentine.

In the fist semi-final match of the VPW Tag Team Championship Tournament, Eclipse defeated the SAT by count out. This has to be considered a huge upset despite Eclipse sneaking their way to victory.

In the second semi-final match, Livewired defeated Sabotage and Joe So Delcicious. It seemed that Joe So Delicious was not in fact at the gym afterall, but instead was out back in a fight with long-time rival Mack Daddy Flexx. It seemed as if Best Bodies, Inc. had the match in total control until Flexx came down to the ringside area where he quickly got into a fist fight with Joe So Delicious. That left Sabotage alone in the ring with JMS and VSK and the table quickly turned in Livewired’s favor.

In a battle of six of VPW’s best, the returning Richie Tyler defeated Minyon, Azrieal, Jorge Santi, Mike Gallagher and Javi-Air. Gallagher was accompanied to the ring by Ms. Terri. Following the match, Azrieal and Javi-Air kicked their rivalry back in to high gear and continued to fight despite the actual match being over. These two have been going at it on and off for over a year.

An injured and upset Vinny the Guido interrupted the ring announcer and started berating the VPW fans that were laughing at him for getting roughed up by Greg Valentine earlier in the night. While Vinny was ranting, Deli Man came from behind and cracked Vinny in the head with a loaf of Italian Bread. Deli Man then rolled Vinny in to the ring where he broke a raw chicken over Vinny’s face. The fun didn’t stop there as Deli Man then took the chicken gizzard and shoved it down Vinny’s throat. Not much is known about this Deli Man, but Vinny the Guido has already swore revenge for this humiliation.

After that incident, it was time for VPW Championship match between Shark Boy and Jason Static. The match went back and forth the whole time, but in the end, Static walked out with his VPW Championship. However Static did not win the match and was disqualified for pulling the referee in front of him to deflect one of Shark Boy’s attacks. Shark Boy had Static pinned and it appeared the referee was calling for the bell to be rung because of the pinfall, but the referee was actually calling for the bell for the disqualification. Following the match, Sabotage and Joe So Delicious hit the ring to go after Shark Boy, but Shark Boy stunned both men. Mack Daddy Flexx, Don Tony and Zombie then came down to help Shark Boy take out the trash. All four men then had a clam juice bash in celebration. Shark Boy then got on the mic and addressed the VPW fans.

To close out the night was the finals of the VPW Tag Team Tournament. In this hard-fought match, two exhausted teams went at it full force. Despite a ton of effort, Livewired were defeated by Eclipse. Xandar Page and Jay Delta have been calling themselves “the resurrection of tag team wrestling’ for over two years, but now they can truly back up that claim. With the gold around their waists, Eclipse has put all VPW teams on notice. Unfortunately for Eclipse, all of the many enemies that they’ve made over the last few years have an even greater reason to come after them.

Victory Pro Wrestling will return to Centereach on Friday night July 11, 2008. Keep up to date with all VPW events and news on www.victoryprowrestling.com. For complete details on the VPW Wrestling School call 631-357-1810 or visit the website.