Home / Behind the Scenes / Afa and Sika in the OWW Hall of Fame!

Afa and Sika in the OWW Hall of Fame! 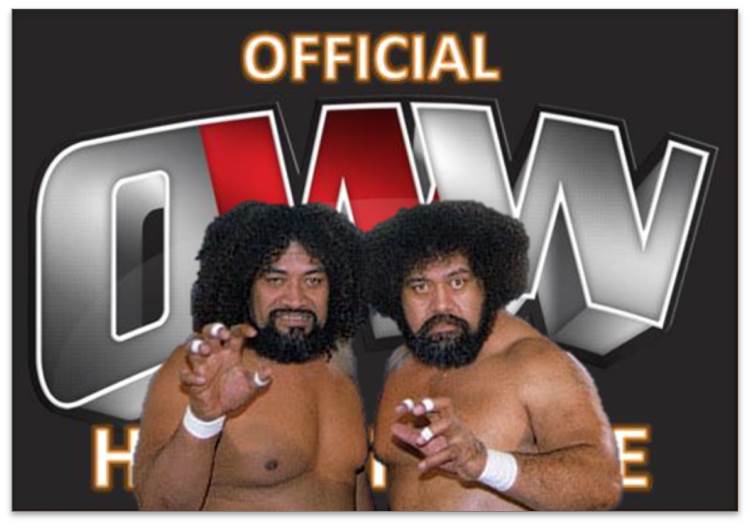 Online World of Wrestling is pleased to welcome the Wild Samoans, Afa and Sika, into its Hall of Fame!

The Wild Samoans are a legendary team that spent time wrestling in Mid-South Wrestling, the National Wrestling Alliance and the World Wrestling Federation. Throughout their careers the Samoans held 21 tag team championships around the world. That’s remarkable!  Afa and Sika were known for their savagery, and in interviews the duo rarely spoke, only grunting in a primitive dialect that only their manager Capt. Lou Albano could understand.  Afa and Aika engaged in outrageous behavior such as eating raw fish during interviews, which only added to their mystique.

It is hard to argue that the Wild Samoans are not one of the most influential and successful tag teams of all time.  Afa and Sika wrestled all over the world and won an unbelievable 21 tag team championships. The team began its career in Stampede Wrestling, and spent the majority of the 1970s in various NWA territories.  The Samoans came to the WWF in the early 1980’s, and although they occasionally competed in singles competition, they found their greatest success as a tag team.  They won their first WWF tag team championship in 1981 and over the next few years had great feuds with Tony Garea, Rene Goulet, Rick Martel, Rocky Johnson, Jimmy Snuka, and André the Giant, winning the WWF titles on three occasions.  Although the Samoans appeared in other promotions such as Mid-South Wrestling and Georgia Championship Wrestling, most people remember their time in WWF where they were one of the best teams of their era.  Each man also found success as a trainer, especially Afa who opened the Wild Samoans Training Center (the school’s graduates include Paul Orndorff, Junkyard Dog, Luna Vachon, Michael P.S. Hayes, Yokozuna, Bam Bam Bigelow, Batista, among others).  Afa and Sika were inducted into the WWE Hall of Fame in 2007.  By any measure, the Wild Samoans are one of the best teams ever.