Home / Columns / What The New Generation Could Learn From Macho Man

What The New Generation Could Learn From Macho Man 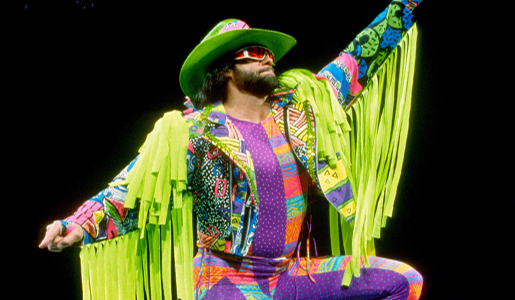 I have now been a fan of Professional wrestling for nearly 30 years.  Wrestling as a whole means much more to me than anything else I could possibly watch for entertainment.  No show, movie, sports team or event is capable of sparking the passion that is sparked in me while watching something new or old on the WWE network, or occasionally some of the best of the current product.   I’m the hardcore fan, the smart mark, the Wrestlemania fanatic, the fantasy booker, and more than likely the WWE network subscriber 4-life.

I was fortunate enough to meet a woman open minded enough to tolerate my passion for professional wrestling.  She has since became a fan and a critic of what she finds entertaining and what she doesn’t.   About a month ago, I had put on The Macho Man documentary on the WWE Network before we went to sleep, even though she had no idea who the Macho Man was. Both of us were equally intrigued by the legendary career of the one and only Macho Man, we ended up watching the entire film.

The next day she texted me saying “ Why Can’t the WWE redo a character like Macho Man on the current show today, rather than pushing a guy like Reigns down everyone’s throat?”    She has had a large enough sample of the best WWE has to offer, and her favorite wrestlers to watch are Stone Cold Steve Austin, Chris Jericho, and now The Macho Man Randy Savage. So hearing her take this stance wasn’t necessarily surprising.  But it did make me stop and think for a second.

The Macho Man character being duplicated isn’t something that should really be tried again, but the qualities that Macho Man possessed in building his legendary character should be duplicated as much as possible.  When both a hard core, old school fan and one who has no real pre-existing notions both heavily prefer watching a character from the 80s over a current talent, it shows the character wasn’t just great but it was exceptional enough to become timeless.  Macho Man was given a platform to showcase his character and he created a legendary marque name for himself.

He grabbed one of Vince’s proverbial “Brass Rings” and “took it to the Limit!”   I decided I’d come up with a short list of attributes that Randy Poffo brought to The Macho Man character that I believe made him stand out from the rest of the pack.  Characteristics that guys like Reigns, and really any current wrestler – WWE or small time- should take to heart, in order to become the best they can be.

Pro Wrestling will always be about inciting emotions and care from the fans.  Pro Wrestling will also always be a work and scripted to meet the long term creative plans.  In order to make wrestling fans suspend their disbelief enough to care about what’s going on, something about it has to feel authentic and real. The more passionate the superstar the more passionate the audience is.   The superstar that genuinely cares about the progression of their character, shows passion.  The superstar that on some level believes in everything that their character says and does, can’t help but have that passion come across evidently. The Macho Man’s intense passionate energy was always felt.   Every program Macho Man was a part of felt like he deeply cared about it, and in turn so did I.

The attire, the dialogue of his promos, the way he ran to the ring, his entrance, even his facial expressions all made The Macho Man feel important.   He believed he was a big deal and acted that way without any doubt or filter, whenever the camera was rolling. And probably even after it stopped.  Even in the later parts of his career, when not every action came with main event billing, it didn’t matter. Wherever Macho Man was on the card, it felt important and it was an attraction in it’s own right.

I don’t think I’m alone in thinking that The Macho Man always had me guessing.  I never knew where he would take an interview or promo. At times I legitimately feared he may snap into a rage and start pummeling the announcer. The idea of changing the channel when Macho Man was on was unfathomable.   Macho Man wasn’t just unpredictable verbally; I truly never knew if he was going to win or lose a match.   He was a rare wild card and did such a great job in the build of a given feud that he was always a threat to win. By the same token, you never knew when something could go wrong, resulting in a loss .  You NEVER knew what would happen next when it came to The Macho Man.

The Macho Man is the epitome of originality.  A creative and charismatic individual that noticeably stuck out, even in a highly talented and interesting crowd.  Whether it be his over the top presence or his signature raspy voice, he was unique.   His voice and catch phrases are still quoted today far beyond just those who watched wrestling intensely when they were kids.  It’s commonly said that Imitation is the sincerest form of flattery. Today’s wrestlers would be smart to start pouring on characteristics that would flatter the late great one. Do you honestly believe that even the biggest Roman Reign fans will be saying “Believe That!” in five years?

Lastly, all of these staples applied to Macho Man whether he was heel or face.  The character progressed and changed when Macho turned heel, but he remained passionate, important, unpredictable and original.   He knew how to change and yet remain the same. It just made sense. In my opinion Macho’s turns, both heel to face and face to heel, have been some of the most iconic  turns in wrestling history.    Few have been equally successful heel or face and done multiple turns like The Macho Man.  This last attribute may be a bit more of a result than an attribute, but it’s a direct result of the characteristics he so greatly possessed and put forward.

As a fan of professional wrestling that has consistently watched from the Hulkamania days through the current “Reality Era” you begin to feel like you have a pulse of what made you fall in love with wrestling to begin with and  what is missing now that was done so well and often then.   Macho Man was an example of performer that exceeded any expectations and maximized the opportunity he was given on the platform that WWE offers.   Times have changed, but as long as WWE still exists, the fan’s are looking to get behind a character that is unpredictable, passionate, believable, and confident.  I can’t help but think the stars today are just waiting to see if WWE is going to pick them to be important and just showing up to do as their told.   They are all supposed to be important!   I think Lenny Poffo said it best in The Macho Man’s documentary when he said “Randy wasn’t special because he was picked, he was picked because he was special”!