Home / Columns / Sunset Flip Presents – who are “they”

Sunset Flip Presents – who are “they” 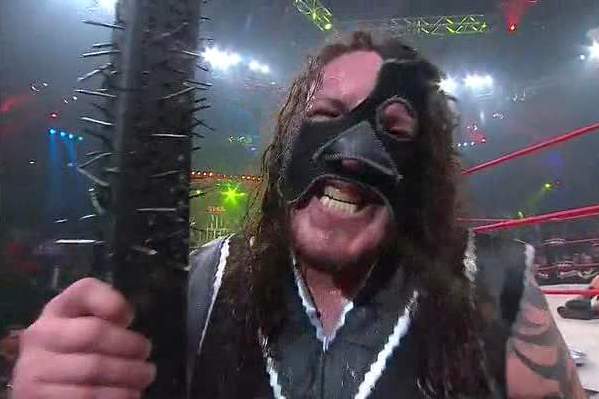 Sunset Flip Presents
Who Are “THEY”?
By Jim Boy Star

A couple of weeks ago, it seemed that TNA announced who “they” were. Flair said “they” were Fortune. However, Abyss said “they” was not Fortune. This was unfortunate because Fortune made sense and now “they” will probably be a disappointment unless it is Shane McMahon or Ted Turner.

So, this week I’m going to look at this a bit comedic. Since I am pretty sure “they” are going to be a big disappointment, I advise TNA to make it so bad that it’s funny. Similar to the Shockmaster, gobblydygooker, etc.

Rabbits: Picture this. Abyss is in the ring at Bound for Glory and he has a rabbit. It would go something like this:

Abyss
You see, they have been talking to me all along. They multiple at a rapid speed and soon, Total Nonstop Action Wrestling will be taken over! We don’t die…… WE MULTIPLY! So Hogan, AJ, Angle, Sting, you are all on notice. Mess with one of us and prepare yourselves for the consequences from hundreds… no!…. thousands of these fury demons. They will rip your heart out just like they eat carrots!

So that is one possibility. Another possibility is an invasion. However, it will be nothing like a Nexus, N.W.O., or ECW invasion. Back to you Abyss!

Abyss
TNA has seen its highs and lows. But they have not seen their lowest of lows. The United States of America is run by a democratic system. However, I will make things a dictatorship. The new regime starts with me and “they”. So Cal Val, get in this ring right now before I hand to do so using force.
(So Cal Val hesistantly gets in the ring looking scared out of her mind, yet still hot at the same time)

Abyss
They want to make an example out of you Valerie. They are a bigger, larger power than Hulkamania could ever be. A more dominant force than the N.W.O. And smarter than Albert Eistein! They are…. THE UNKNOWNS!
(Suddenly the lights go out in the arena. There is a “whirring” sound throughout the arena. And there’s a flying saucer! It lands in the ring with Abyss and Val is trying to get away, but Abyss forces her to stay in the ring)

Abyss
YES! THEY ARE HERE! AND THE FACE OF TNA IS ABOUT TO CHANGE!
(Smoke fills the ring and out of the flying saucer walks an alien a little taller than Abyss. He starts mumbling something that sounds like strange sound effects)

Abyss
They have a message for the TNA fans and TNA wrestlers. You will bow down to the new lord and if you don’t you will have to be converted. (So Cal goes to make a run and freezes)

Abyss
If the full concentration is on you, then they can make you do almost anything.
(Hulk Hogan‘s music plays and the Unknown takes focus of SoCal Val and she gets away. Hogan stands off with the Unknown from the stage. Suddenly out of nowhere a chair flies and hits Hogan right in the face. He’s staggered and another one comes and knocks him down. Abyss and the Unknown laugh)

Abyss
And as far as the rest of you fans go. Get out of here! And you better run!
(Show ends)

So those are idiotic or kind of stupid and idiotic, I admit that. However, after you do find out “they” are, read this column back cause you may wish one of my situations actually happened. You will wish because at least my situation was so bad that it was funny in a stupid way. TNA has set “they” up for disappointment and their reveal will probably so stupid that it just sucks.

Listen to the latest edition of Sunset flip Wrestling show at sunsetflipwrestling.podomatic.com